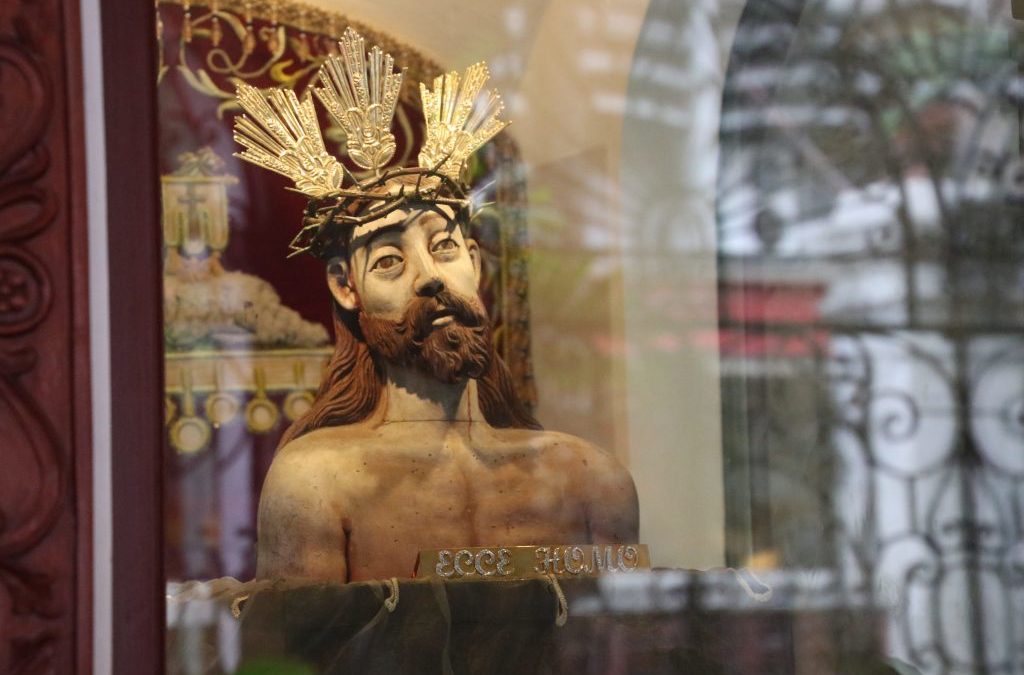 Our celebration today is another special moment in the history of the Basilica del Sto. Niño. For a long time, along with the venerable image of the Sto. Niño de Cebu, we are also keeping a precious piece of history: that is the image of Ecce Homo. In 1572, some seven years after the Finding of the image of the Sto. Niño de Cebu, Juan de Castilla, another soldier living at that time in Cebu, has discovered accidentally the burial place of a certain Rajah Carli, of whom they identified as one of those baptized during the time of Ferdinand Magellan’s arrival in this place. With the remains of the reputed Rajah, they found the image of the Ecce Homo buried with him. It was August 20,1572 and today we celebrate the 446th anniversary of its own discovery.

Sadly, the devotion and piety around the “Ecce Homo” has not been intensified throughout the years. This is the reason why we are reviving the devotion nowadays when we can relearn the lessons and draw reflections on the mystery of the suffering nonetheless serene countenance of Jesus. We may be drawn aback at first if only we want to find Jesus as the glorious King and not in his sufferings as the image is portraying. We may tell ourselves, we have a lot of pains and sufferings, we have a lot of problems and complications in life. One may say: I want to see a face of Jesus who can inspire me hope and enthusiasm. But that is actually what the image of “Ecce Homo” would like to inspire us with. In the first reading, Isaiah tells us that He is has suffered and has familiarized pain and suffering. He is called even a “man of sorrows”. But Isaiah take us to the point of Jesus’ sufferings: that by his wounds we were healed.

The devotion will enable us therefore to realize that today as any other times of our lives, seeing the suffering face of Jesus reminds us of our own weakness and sufferings. Pilate, as one bible commentator, said more than a mere expression of pity. “Ecce Homo” is a calling to us by realizing – see the face of the Lord and see yourselves in Him! Jesus is also telling us, just by seeing the suffering countenance, “I am doing this for you because, I want to love you by taking up your failures and sins in me.”

The image of the “Ecce Homo” today is also a relevant portrayal of the happenings today as well. When there are a lot of lives lost for reasons not clear; there seems to be a systematic killings and pains which beset the Christian community today. More than ever just the “Ecce Homo” is a reminder that every killed person innocent or criminal; less corrupt or notoriously sinful, Jesus embraces them all. Remember Jesus tells us: “But I say to you, Love your enemies and pray for those who persecute you, so that you may be sons of your Father who is in heaven; for he makes his sun rise on the evil and on the good, and sends rain on the just and on the unjust” (Matt. 5:44-45 RSV). If we approve the way society apprehends evil, we are just actually allowing evil to abound. But the mystery of human life is a precious gift of God. This is the message of Ecce Homo: Jesus undergoes the passion, death and resurrection as an opposition to all people who resolves evil through evil. Jesus accepted death on the cross because of our sin in order to “displace” and “replace” the meaninglessness of human effort to destroy life by making Himself willingly accepting it. He died because primarily of love not because to lend credibility on the death penalty of the Romans. He used the venue and opportunity of the cruelest death penalty in his time to have the greatest stage and spectacle of love destroying death before the eyes of men and women. Hence, the death of Jesus is an “argument” against death penalty in the historical situation [and against everlasting death in the cosmic and eschatological sense.]

As we revive the devotion to the “Ecce Homo” let us take heed of these challenges:

1. By refreshing ourselves with the Passion of the Lord, we are called to unite and identify our pains with Him as he identified himself with us. He is like us “homo” a man.

2. Let us unite also those people who cannot do it for themselves because of the desperation of sickness: physical, mental, emotional and spiritual. Remembering them on the face of Jesus will help them a lot in alleviating their pains and in enlightening them with the Christian understanding of their sufferings.