Originally a brainchild of rev. Fr. Apolinario Mejorada, OSA, the then Basilica Rector, in 1989, the Santo Niño Pilgrim Center is a structure that responds to the growing need for space of the increasing number of pilgrims and devotees of Santo Niño. This huge project, both structurally and financially, was symbolically begun on April 29, 1990. But due to insufficient funds, it was re-launched on April 27, 1991. Construction followed on June 24, 1991. As said above, the edifice was conceptualized for the needs of the pilgrims and devotees and as an extension of the Basilica.

Before the construction, the open area was called Santo Niño plaza or templete, where there is a fountain at the center and surrounded by a stage, clinic, basketball court, and vendors’ stalls. The fountain was later transferred to the inner garden of the convent. Meanwhile, the basketball court remained until 2005, when it was converted to be a candle area. 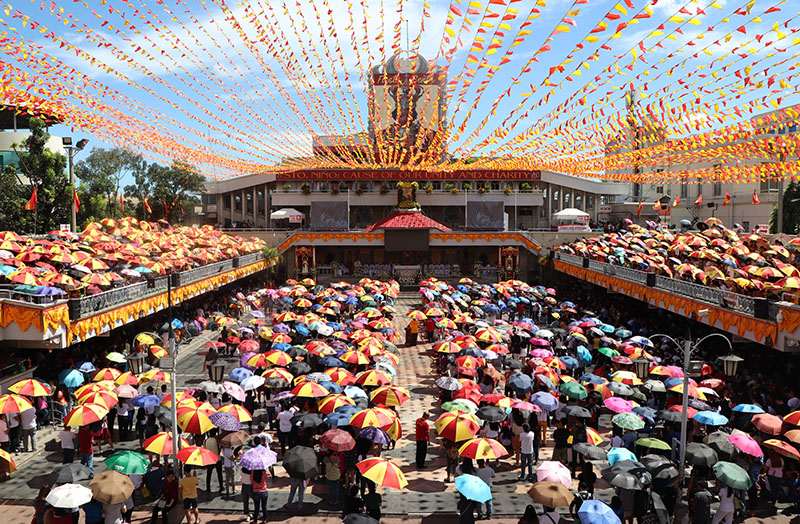 Other important offices and areas in the Pilgrim Center are the BMSN Museum (1995), Mass Media Center (2016), and the function room Aula Magna for the use of both the Basilica and Provincialate communities' activities. In 2017, two sets of restrooms were added at the left and right wing of the elevated benches of the Pilgrim Center. Another structural addition was constructed on both sides of the pilgrim center for the Command Center and the Office of the Lectors and Cantors Ministry in 2018.

The Santo Niño Pilgrim Center has been another “landmark” for Santo Niño with its iconic facade mimicking the retablo mayor inside the church. In its plaza or square many sinug dances, prayers and of course celebrations of outdoor Holy Masses took place all through out the year to honor the Child Jesus, Sñr. Santo Niño.