The Cross of Magellan 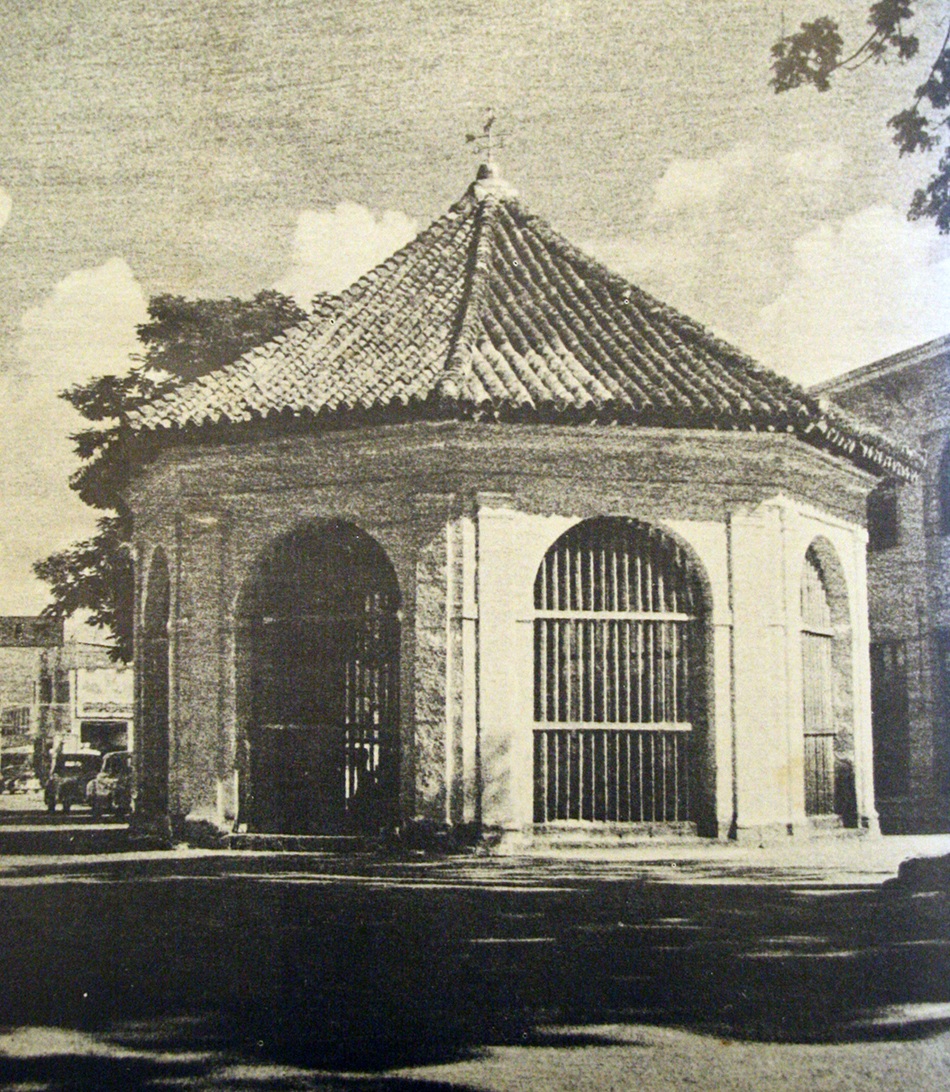 From time immemorial this spot has been set aside to commemorate the erection of a cross in Cebu by the expedition of Ferdinand Magellan. When King Humabon of Cebu and his queen, son and daughters, together with some 800 of their subjects were baptized by Father Pedro Valderrama. This hallowed site was improved in 1735 by Rev. Fr. Juan Albarran, OSA, Prior of San Agustin and in 1834 by Rt. Rev. Santos Gomez Marañon, Bishop of Cebu (Granted plenary indulgence). The of the Santo Niño found by the expedition of Miguel Lopez de Legazpi in a house near the present site of the Cathedral of Cebu is venerated by the faithful in the nearby church of San Agustin. (1941). 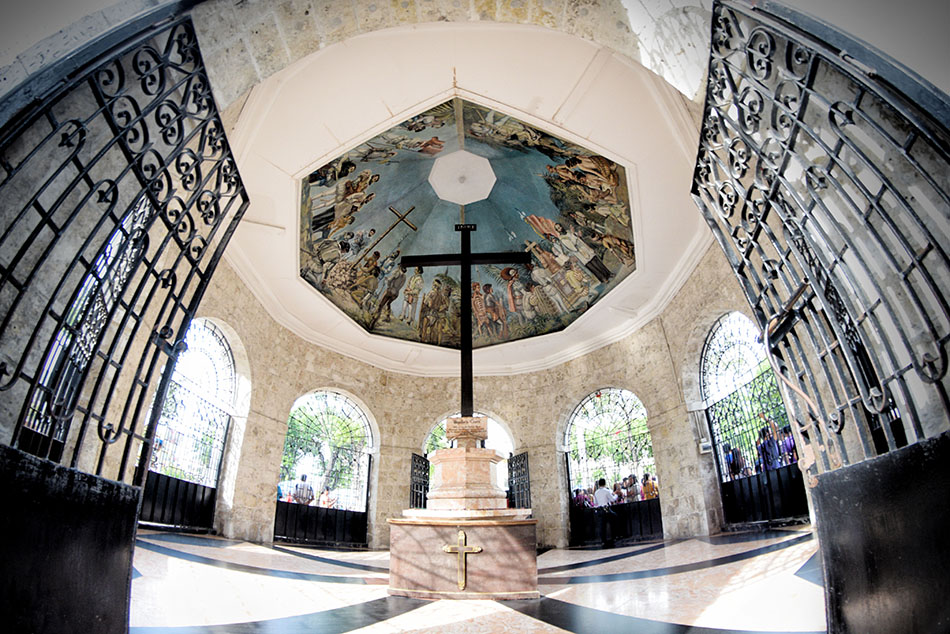 Did you know that the Magellan’s cross was granted a plenary indulgence for those who piously pray before it every Feast of the Triumph of the Cross? You have to pray One (1) Our Father, One (1) Hail Mary, and One (1) Glory to the Father for the intention of the Holy Father in Rome. It was granted by Bishop Santos Gomez Marañon, Bishop of Cebu, 1830-1840.

About the Magellan's Cross

The Gazebo of the Magellan’s Cross is a religious and pilgrim site that commemorates the foundation of Christian faith in Cebu. Its history should be traced from the time of Ferdinand Magellan in 1521. Antonio Pigafetta reported that when they arrived in Cebu, a cross was erected in order to manifest their intention that faith should be spread in the land. Pigafetta reported on the event of the baptism of Rajah Humabon, “A large cross was set up in themiddle of the square. The captain told them that if they wished to become Christians as they had declared on the previous days, that they must burn all their idols and set up a cross in their place. They were to adore that cross daily with clasped hands, and every morning after their [i.e. the Spaniards] custom, they were to make the sign of the cross (which the captain showed them how to make); and they ought to come hourly, at least in the morning, to that cross, and adore it kneeling. The intention that they had already declared, they were to confirm with good works.”

The question whether the cross of Magellan survived or not is debate among historians. According to Antonio de Herrera, “The Cebuanos, after killing the captains of Magellan (which was the massacre of May 1, 1521), tried to pull it out but they were not able to do it.” Many historians including Augustinian chroniclers supported this view. However, logical conclusion suggests that the original Magellan’s cross must have been long ago destroyed even if it was not yet successfully dismantled in 1521. What is sure is that there was another cross which was erected on the traditional sport where supposed to be Magellan had set up his on April 14, 1521. The Augustinians of the Legazpi expedition in 1565 put a cross in front of their house. This cross was saved on the conflagration on November 1, 1566. It was then venerated as miraculous as it survived the fire. It was not even called “Magellan’s Cross” but tradition refers to it as “Cross of the Spaniards” (Cruz de los Españoles) or simply up until the recent times among the old people of Cebu as “Santa Cruz”.

The Magellan’s Cross Gazebo is a religious site and not just a cultural landmark of Cebu City and even of the Province (Cebu City has dominantly used it as part of its official heraldry and seal). As it was set by Ferdinand Magellan that the cross should be approached in devotion and faith, it was a commanding standard that inspires Christian action in every native’s heart. And henceforth, it has been a center of devotion as well aside from the Church where the Santo Niño is enthroned. It was also an object of devotion that, it also fell into extreme pious actions life chipping the wood aways as a religious memento for a devotee. In 1730’s Fray Juan de Albarran, OSA, who was the builder of the present church and convent of Santo Niño, reported that the cross was covered by a wooden board fastened with nails as its protection from those who would like to pick a fragment from it. Nonetheless, the cross had stood exposed to the element until 1834 when the Augustinian Bishop of Cebu Santos Gomez Marañon, ordered and sponsored the construction of the present octagonal gazebo made of coral stone and covered with red-tiled tegula roof. The ceiling painting was added sometime in 1960’s renovation which also changed the original wood gates into iron work. As a religious site, the Cross enjoys espiscopal concessions of indulgences. Bishop Marañon allowed the Prior of Santo Niño or his designed priest to celebrate daily Mass whenever there is a need. He also granted the Feast of the Triumph of the Cross (celebrated in the old on June 16) or in any other day without prohibition in the rubrics to celebrate Mass in the place. Finally, the Gazebo was privileggiado for 10 years for a forty-day indulgence for the faithful who pray the Credo in front of the cross. In 1888, Bishop Alcocer extended the privileges given by Marañon. On October 15, 2013, the gazebo was greatly affected by the 7.3 earthquake. The cross leaned and the stones and roofs needed to be repaired.

On the ceiling of the pavilion's interior is a mural depicting the baptism of Rajah Humabon and his household by Fr. Pedro Valderrama and the planting of a wooden cross by Ferdinand Magellan. The artists’ names are inscribed on the ceiling. They are Jess Roa and Serry M. Josol. The year it was painted is unknown. However, photographs during the 1965 4th centenary of the Christianization of the Philippines tell that the paintings were already part of the kiosk.

On April 14, 2021, with the Basilica Minore del Santo Niño de Cebu Church, the Magellan's Cross was declared a National Cultural Treasure (NCT) by the National Museum through the National Quincentennial Committee of the Philippine Government during the 500 Years of the Introduction of Christianity celebrations.