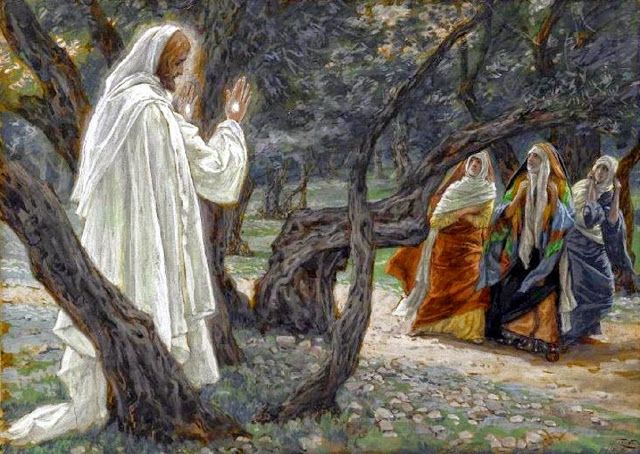 Mary Magdalene and the other Mary went away quickly from the tomb,
fearful yet overjoyed,
and ran to announce the news to his disciples.
And behold, Jesus met them on their way and greeted them.
They approached, embraced his feet, and did him homage.
Then Jesus said to them, “Do not be afraid.
Go tell my brothers to go to Galilee,
and there they will see me.”

While they were going, some of the guard went into the city
and told the chief priests all that had happened.
The chief priests assembled with the elders and took counsel;
then they gave a large sum of money to the soldiers,
telling them, “You are to say,
‘His disciples came by night and stole him while we were asleep.’
And if this gets to the ears of the governor,
we will satisfy him and keep you out of trouble.”
The soldiers took the money and did as they were instructed.
And this story has circulated among the Jews to the present day.

“In fear, yet with great joy, the women left the tomb and ran to tell the news to his disciples.”

Where were they hiding when Jesus was hanging on the cross? The disciples, except for the beloved John, were not at Jesus’ dying moment. They were frightened and afraid. They left the God-Son. Was it not harsh and unfair to say that your closest friends were not there when you needed them most? But they were humans too. They were not really sure of what was going on. They were puzzled with all of Jesus’ teachings. Jesus never revealed it directly to his disciples the suffering that he was going to endure. And so, out of the fear of the unknown, the disciples fled from him.

It was the women who first saw Jesus. They were terrified yet in silence they rejoiced for the Lord has truly risen. They are asked to tell the news to the disciples. They are the first witnesses of Jesus’ resurrection. They aren’t sure if the disciples will believe them. But they are convinced that it is Jesus who appears to them.

In our life, we do not need to see everything in order for us to believe. You see? We cannot see the air, but we believe that there is air that sustains our breathing. We just feel it. We do not see angels, but when we think of them, we feel like they are just on our side. The same goes with our belief in God. We do not see God but we can feel Him. We know that He is just there protecting us, leading us into better paths of life.

There are many things in life that we cannot understand. It is beyond all our rational capability. Sometimes we just need to feel it in order to believe