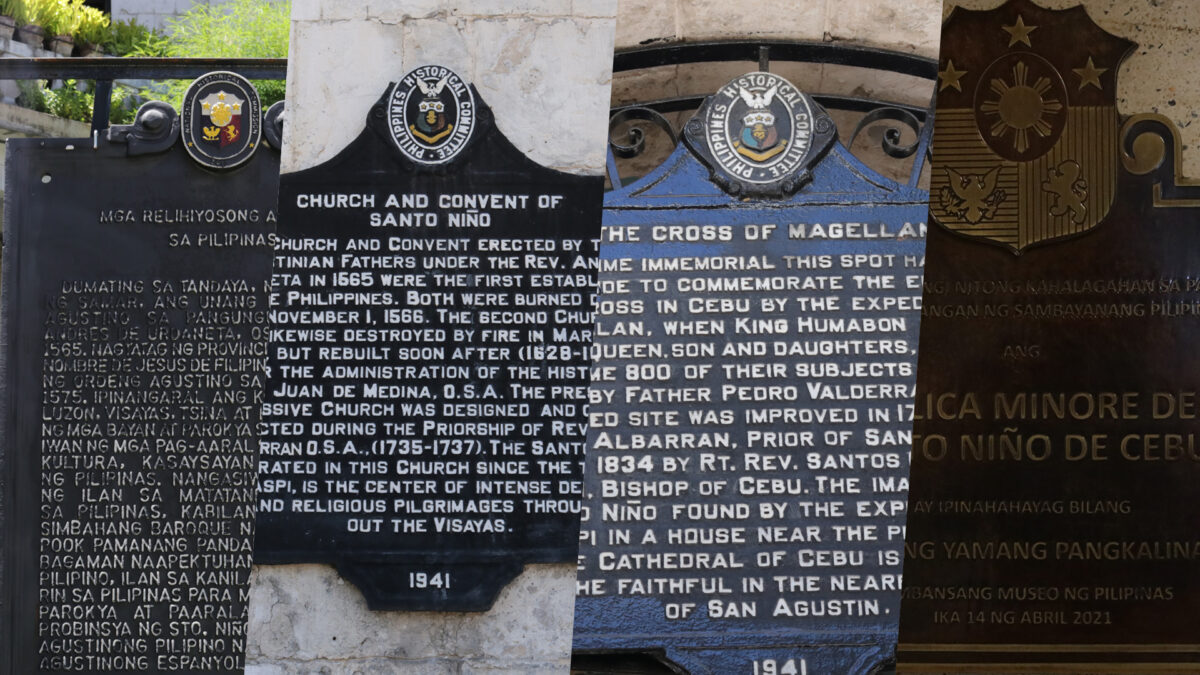 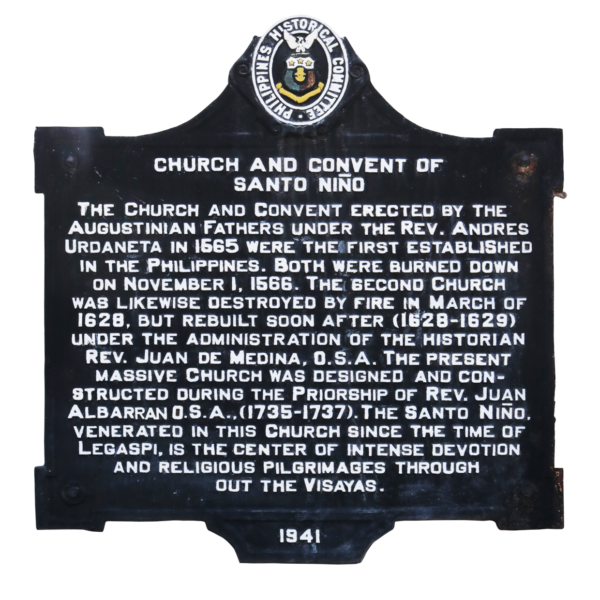 “The Church and Convent erected by the Augustinian Fathers under the Rev. Andres Urdaneta in 1565 were the first established in the Philippines. Both were burned down on November 1, 1566. The second church was likewise destroyed by fire in March of 1628. But rebuilt soon after (1628-1629) under the administration of the Historian Rev. Juan Medina, O.S.A. The present massive church was designed and constructed during the priorship of Rev. Juan Albarran, O.S.A. (1735-1737). The Santo Niño, venerated in this church since the time of Legazpi, is the center of intense devotion and religious pilgrimages throughout the Visayas.” 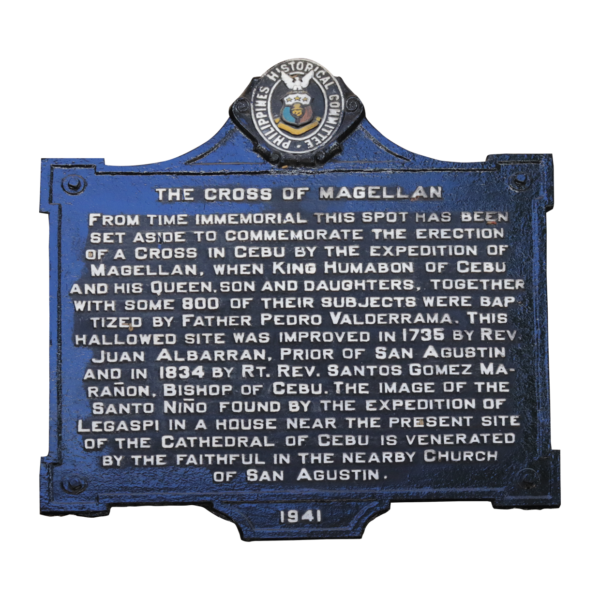 Text:
“From time immemorial this spot has been set aside to commemorate the erection of a cross in Cebu by the expedition of Magellan. When King Humabon of Cebu and his Queen, son and daughters, together with some 800 of their subjects were baptized by Father Pedro Valderrama. This hallowed site was improved in 1735 by Rev. Juan Albarran, Prior of San Agustin and in 1834 by Rt. Rev. Santos Gomez Marañon, Bishop of Cebu. The image of Santo Niño found by the expedition of Legazpi in a house near the present site of the Cathedral of Cebu is venerated by the faithful in the nearby Church of San Agustin.”

3. THE AUGUSTINIAN RELIGIOUS IN THE PHILIPPINES (2018) 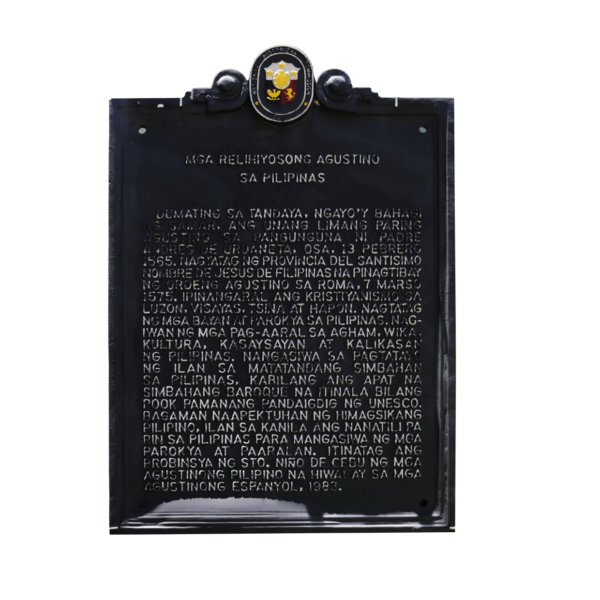 Translation:
Arrived in Tandaya, now part of Samar, the first five Augustinian priests led by Father Andres de Urdaneta, OSA, 13 February 1565. Founded the Provincial del Santisimo Nombre de Jesus de Filipinas ratified by the Augustinian Order in Rome, 7 March 1575. Christianity preached in Luzon, Visayas, China and Japan. Established towns and parishes in the Philippines. Left studies in Philippine science, language, culture, history and nature. Supervised the construction of some of the oldest churches in the Philippines, including four Baroque Churches listed as UNESCO World Heritage Sites. Although affected by the Philippine revolution, some of them remained here in the Philippines to oversee parishes and schools. The Province of Sto. Niño de Cebu of the Filipino Augustinians separate from the Spanish Augustinians, 1983. 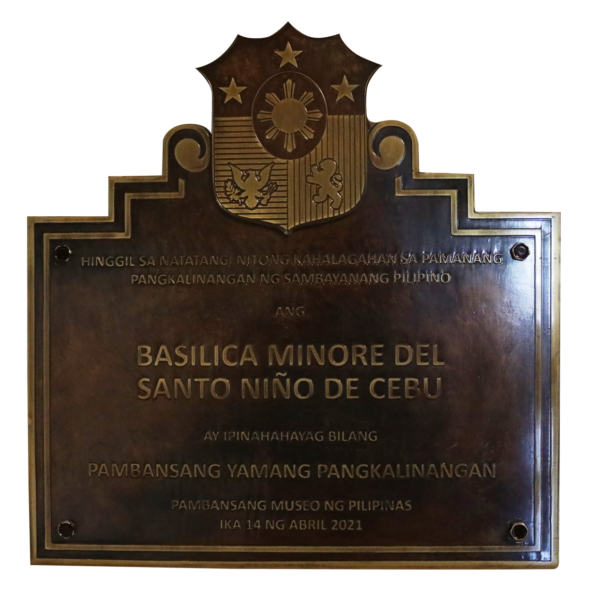 Translation:
Regarding its unique importance to the cultural heritage of the Filipino people and the Basilica Minore del Santo Niño de Cebu is declared as a NATIONAL CULTURAL TREASURE. National Museum of the Philippines

Government Institution: National Museum of the Philippines
Date of Unveiling: April 14, 2021
Location: Hanging on the left side of the arch from entering the Porta Minor. 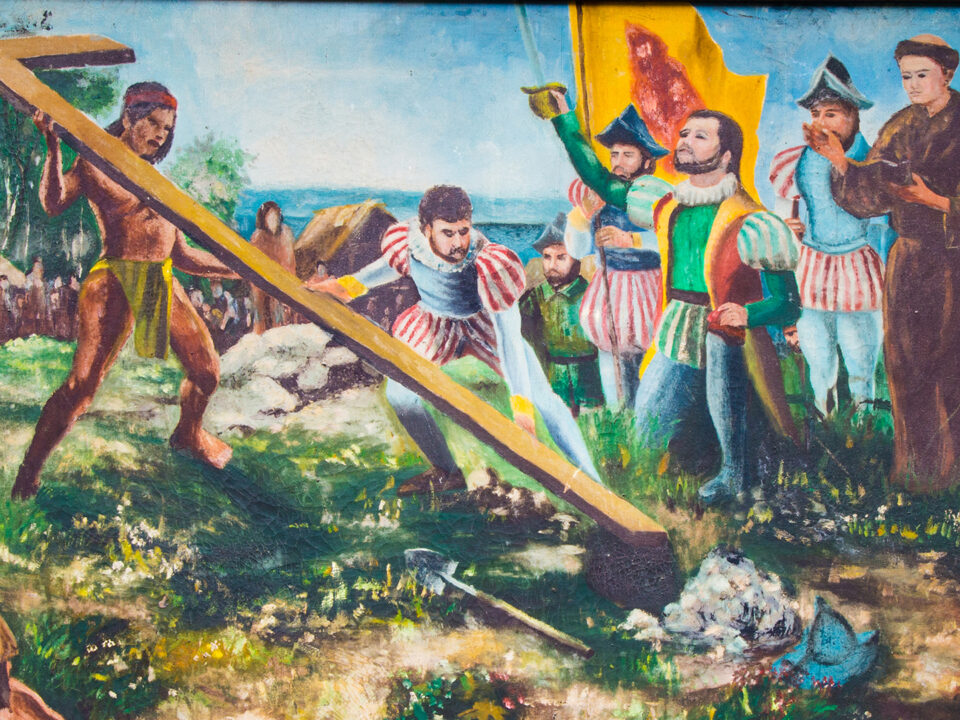 Planting of the Cross