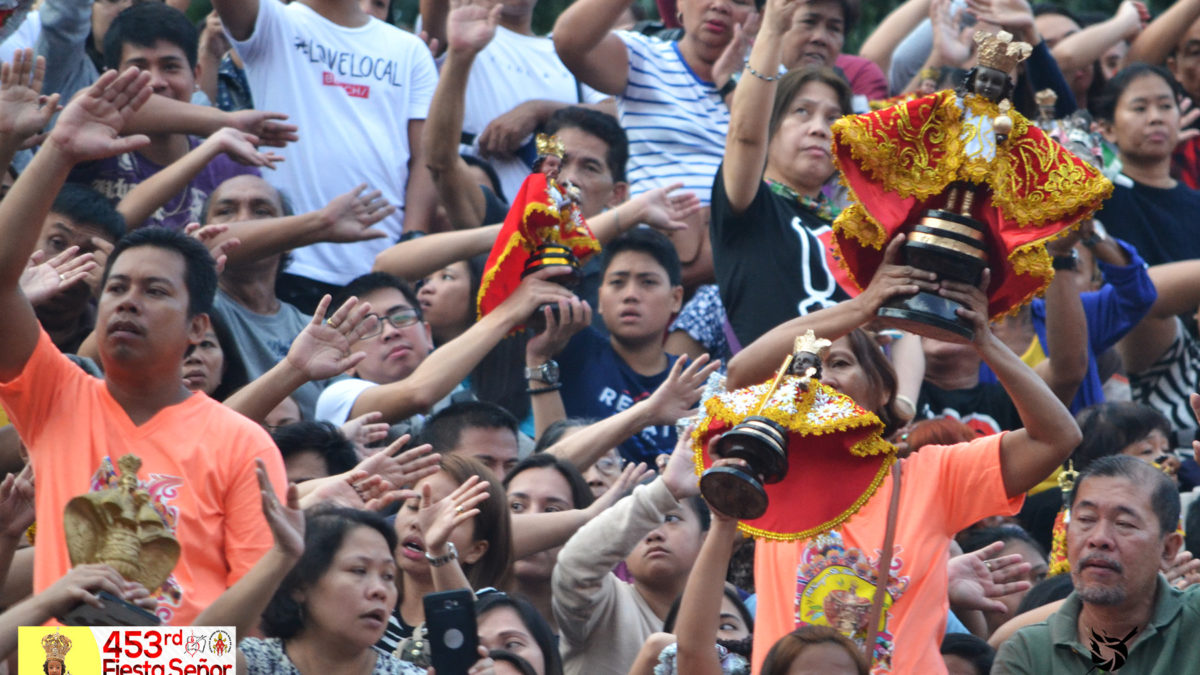 Our celebration of the feast of Señor Santo Niño is DEEPLY ROOTED in Sacred Scripture. Here are Biblical verses proving that our faith is authentic and Christ-centered.

a. PROCESSIONS and HUGE CROWDS:

– Jesus withdrew with his disciples to the lake, and a large crowd from Galilee followed. When they heard about all he was doing, many people came to him from Judea, Jerusalem, Idumea, and the regions across the Jordan and around Tyre and Sidon. (Mark 3:7-8)

b. VENERATION OF IMAGES:

– Make two winged creatures of hammered gold, one for each end of the lid. Make them so that they form one piece with the lid. The winged creatures are to face each other across the lid, and their outspread wings are to cover it. Put the two stone tablets inside the Box and put the lid on top of it. I will meet you there, and from above the lid between the two winged creatures I will give you all my laws for the people of Israel. (Exodus 25:18-21)
– Then the LORD said to Moses, “Make a fiery serpent, and set it on a standard; and it shall come about, that everyone who is bitten, when he looks at it, he will live.” And Moses made a bronze serpent and set it on the standard; and it came about, that if a serpent bit any man, when he looked to the bronze serpent, he lived. (Numbers 21:8-9)

If the Israelites were healed whilst gazing upon a bronze serpent, how much more will God grant graces to those who look on the face of his Son with fervor and love?

c. Wiping and Raising of Towels

– And there was a woman who had had a discharge of blood for twelve years, and though she had spent all her living on physicians,she could not be healed by anyone. She came up behind him and touched the fringe of his garment, and immediately her discharge of blood ceased. And Jesus said, “Who was it that touched me?” When all denied it, Peter said, “Master, the crowds surround you and are pressing in on you!” But Jesus said, “Someone touched me, for I perceive that power has gone out from me.” And when the woman saw that she was not hidden, she came trembling, and falling down before him declared in the presence of all the people why she had touched him, and how she had been immediately healed. And he said to her, “Daughter, your faith has made you well; go in peace.”
(Luke 8:43-48)

– God did extraordinary miracles through the hands of Paul, so that even HANDKERCHIEFS and aprons that had TOUCHED him were taken to the sick, and the diseases and evil spirits left them. (Acts 19:11-12)

d. Waving and Lifting of hands during the Gozos

– In every church service I want the men to pray, men who are dedicated to God and can LIFT up their hands in prayer without anger or argument. (1 Timothy 2:8)

– Praise his name with dancing; play drums and harps in praise of him. The Lord takes pleasure in his people; he honors the humble with victory. (Psalms 149:3-4)

– David, wearing only a linen cloth around his waist, DANCED with all his might to honor the Lord. And so he and all the Israelites took the Covenant Box up to Jerusalem with shouts of joy and the sound of trumpets. (2 Samuel 6:14-15)

“Pit Señor” is an abbreviated form of “Sangpit sa Señor”. In English these words mean, “Hail the Lord!”, “Call upon the Lord!” and even “Praise the Lord!”. Note that hail is a synonym of praise. Spanish-speaking people refer to the Lord as Señor as well.