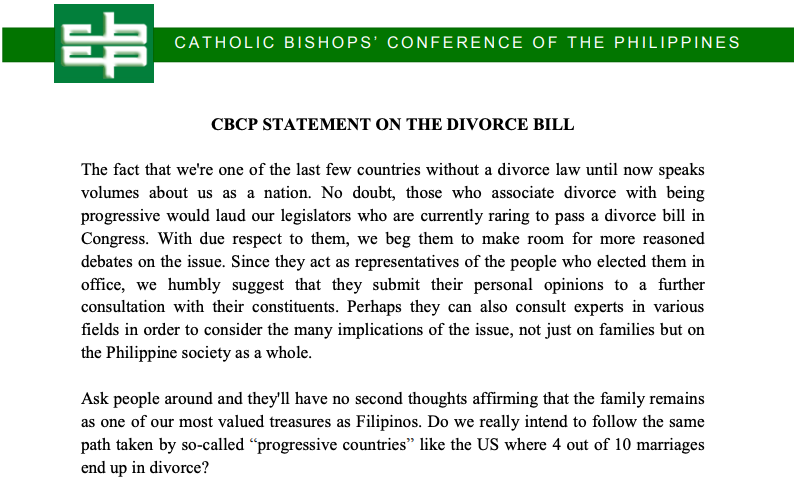 On December 18, 2018, the President of the Catholic Bishops Conference of the Philippines released a statement regarding the passage of the Divorce Bill in Congress. Here is the complete statement of the CBCP:

CBCP STATEMENT ON THE DIVORCE BILL

The fact that we’re one of the last few countries without a divorce law until now speaks volumes about us as a nation. No doubt, those who associate divorce with being progressive would laud our legislators who are currently raring to pass a divorce bill in Congress. With due respect to them, we beg them to make room for more reasoned debates on the issue. Since they act as representatives of the people who elected them in office, we humbly suggest that they submit their personal opinions to a further consultation with their constituents. Perhaps they can also consult experts in various fields in order to consider the many implications of the issue, not just on families but on the Philippine society as a whole.

Ask people around and they’ll have no second thoughts affirming that the family remains as one of our most valued treasures as Filipinos. Do we really intend to follow the same path taken by so-called “progressive countries” like the US where 4 out of 10 marriages end up in divorce?

We do not doubt the sincerity of our pro-divorce legislators.  It is precisely their good will which we wish to appeal to in asking them to reconsider their moves towards legalizing the dissolution of marriages. We do not even question the fact that there are indeed failed marriages and that not all married coupled were “joined together by God”. Thus, we have provisions for both canonical and civil annulments, which are not exactly the equivalent of divorce. They are provisions that demonstrate how seriously we take marriage as an institution, such that we make room for the possibility that some marriages might have been null and void from the start, such as when couples enter into marriage not for love, but for family pressure, and for many other similar reasons that suggest that no valid marriage took place. The legal remedies for such difficult circumstances are not lacking in our existing laws, both civil and canonical.

The social costs that go with an easy recourse to the dissolution of a marriage when couples begin to face the difficult challenges of marital love and commitment are what we ask our legislators to consider seriously.  Even couples in seemingly successful marriages would often look back and recall the countless challenges that had almost brought their relationship to a breaking point if they had not learned to transcend personal hurts through understanding and forgiveness, or sometimes through the intervention of a dialogue facilitator such as a marriage counselor.  In a context in which divorce is presented as an easy option, marriages and families are bound to break up more easily. More children will grow up disoriented and deprived of the care of both parents.

We do not mean to interfere with the dynamics of a political entity such as our country’s legislature. We are fully aware of the limits of our influence as spiritual and moral leaders of the ecclesial communities entrusted to our care. We also acknowledge plurality and diversity of moral opinions on the matter at issue. We merely ask that they consider the possibility that divorce,  while it  may  indeed  provide  quick legal remedies for some seemingly “failed marriages”, might end up destroying even those marriages that could have been saved by dialogues or the intervention of family, friends, pastors, and counselors.

Like Catholics in most other countries where divorce is legal, we wish to assert that nothing, not even a divorce law can make us give up our faith in the indissolubility of marriage as a lifetime covenant between a man and woman who have freely said yes to the call to love and commit themselves to God and to each other, through thick and thin.

For the Catholic Bishops’ Conference of the Philippines,