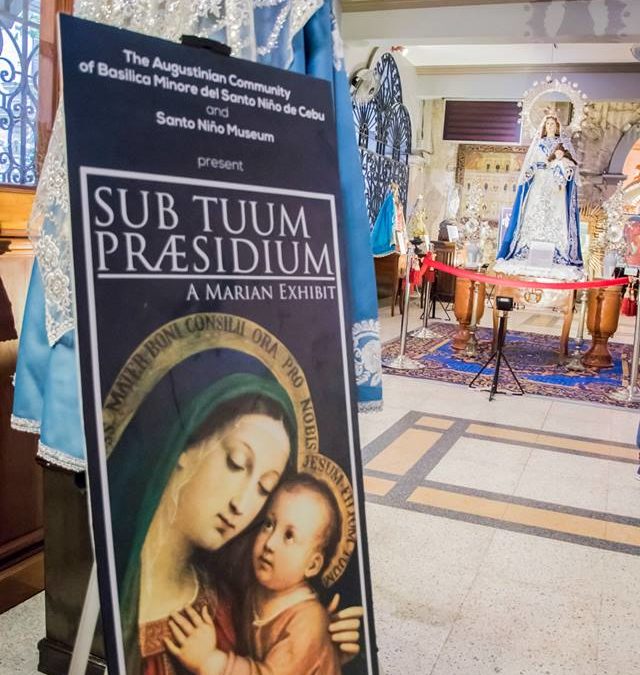 It has been a tradition of the Augustinian friars when they pray, they dedicate a beautiful Marian prayer “Sub Tuum Præsidium” (Under Your Protection) as its conclusion. It is as though they put all their works and apostolates under the protective mantle of the Blessed Virgin Mary. She would defend the friars from the evil forces that would detract them in doing God’s will.

In this Marian exhibit, entitled aptly “Sub Tuum Præsidium”, the Basilica Minore del Sto. Niño de Cebu, under the auspices of the Augustinian Friars, in cooperation with the Sto. Niño Museum, presents this little exhibit of different Marian titles. They have been used for invocation by Christians and honored by the Augustinians and other religious congregations and propagated Marian piety under these titles.

Many ask Filipino Catholics why the Blessed Virgin possesses so many titles and endearments. As Filipinos, we love so much the Blessed Mother because her spiritual motherhood to Filipinos has been so constant in the lives of our fellowmen. We are culturally family-oriented and maternity is a sign of hope and consolation, care and protection in the family. The Filipino Church is indeed a “Pueblo amante de Maria” – a community truly captivated in love with the Blessed Virgin Mary. A people truly tied to Mary’s care and love endeared to her so much that this love is expressed in different “names”. Indeed, we really know whom do we love. Titles express essential facts about the person we love. The Blessed Virgin’s different titles of honor, rank and distinction of love by the people who love her “ultimately emphasizes some aspect of her relationship to God or to us.” She will be known by the generations of men and women as she herself prophesied to be called “blessed” (Luke 1:48).

While we encounter more the Blessed Mother in her different titles, may we be familiar with the singular love and protection she shared to many Christians. She is loved and beseeched for her maternal protection down the ages. Indeed, under her protection, we seek refuge in the love and protection which she imparts to us from the power and mercy of her Son Jesus, the Sto. Niño.

The Marian exhibit is located inside the Basilica Church and will end on October 31, 2017. The exhibit was officially opened on October 1, 2017 through a short program led by Rev. Fr. Pacifico Nohara, OSA, rector.