To dream, anyone can do it; to achieve the dream, one must be willing to do it.

(I wanted to give name [honor] to my parents.)

(I wanted people to say to my Mother that she already has a son who is now a lawyer.)

These were the words of Aga, a young man who recently passed the November 2019 bar examinations.

Aga, eldest of four siblings, as he is called by many was a child whose family was living on the streets of San Isidro, Leyte, Eastern Visayas.

He used to collect and sell bottles, metal scraps and steel to name a few while his mother did laundry, both of which was to earn a living and provide food for their family.

When most families enjoy the comforts of having roofs and walls, beds and pillows, spoons and forks, Aga’s family barely had none of these; worse, when heavy rain falls, they have nowhere to go and no place to sleep.

(If flood occurs, we can’t sleep and we only use carton as blanket and sleeping mats. If my mother could buy a can of sardines, it seems like a birthday celebration already. Just one can… we are already very happy.)

His family was survived by his father who succumbed to illness when he was still seven years old.

Back then, children aged 4 or 5 were already enrolled to primary education but for Aga, it was a different story. 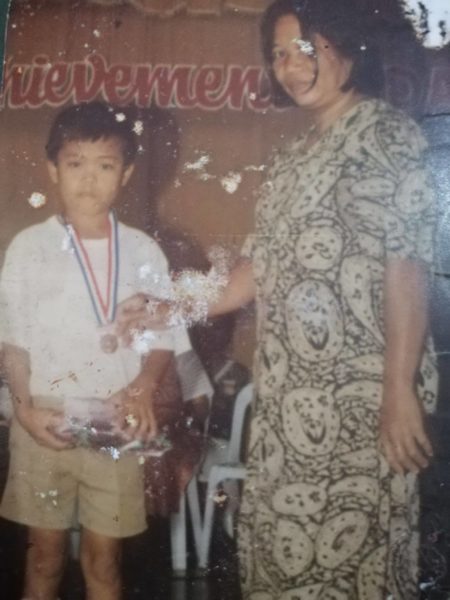 Aga (boy on the left) wears a set of uniform borrowed from the woman right beside him. He asked the woman to accompany him on stage to award his medal since no one could attend for him.

For him, being able to go to school was like an unreachable star.

(My parents could not afford to send me to school and so it was really impossible for me.)

Despite of knowing this fact, Aga still had hopes that one day he would be able to enter into the so-called classroom.

He was nine when a couple noticed him and asked if he could stay in their home along with his family in exchange of him working while schooling.

With no hesitation and full of excitement, Aga agreed as his dream of going to school was just a step away.

Due to his eagerness in learning how to read, every night, Aga collects pieces of paper, plastic cellophanes, or anything with writings on it on his way of home and places it on a box.

His objective was to be able to read those before placing them to trash.

Years later, he was able to finish primary and secondary education with flying colors.

A right yet a privilege

Tertiary education or college is considered a privilege because not everyone could acquire it.

In the case of Aga, just as he thought his learning journey would end in high school, he received one of the best news.

Fr. Dennis Cuervo, OSA, who was in Leyte to spend his vacation and was invited as a guest speaker in one of the elementary schools in his hometown heard of Aga’s story. 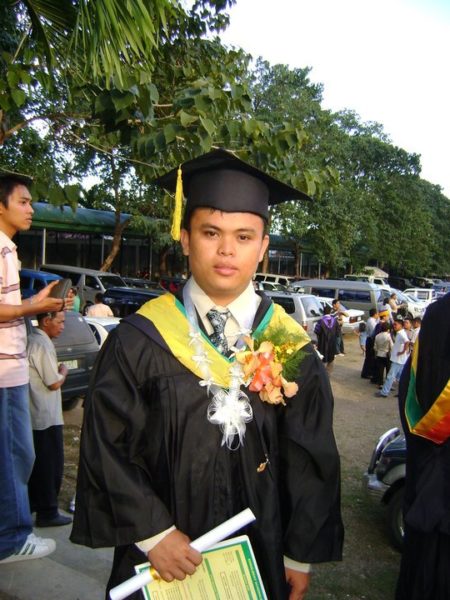 Aga on his graduation day.

During that time, Fr. Cuervo was looking for a working student of whom he will be bringing to Cebu to serve at the Basilica Minore del Sto. Niño de Cebu (BMSN).

When Aga knew that Fr. Cuervo has chosen him to be one of their working students, he gladly accepted it and eventually, he became part of the pioneering batch of scholars of the BMSN Children’s Welfare Foundation Inc (BMSN-CWFI).

Aga chose to take up Bachelor of Science in Accountancy (BSA) in one of the well-known universities in Cebu.

Upon learning that his degree program would take him at least five years to finish, he shifted to BS Management Accounting (BSMA) because he wanted to graduate and work as soon as he could.

Aga heard that his family was not doing well – the reason which made him persevere to immediately earn and provide for them.

(It is very painful to know from people that your mother is seen roaming elsewhere… This is why I dreamt of getting her there [Leyte].)

While others enjoy their allowances on their own, Aga opted to send it to his family in Leyte.

In times of weariness, he thinks of something to look forward to for him to keep going.

He recalled what one of the friars reminded them that they (working students in the Basilica) are blessed for they have been chosen among the many young people who wanted to study.

In 2008, Aga received his degree and the following year he was able to bring his family to Cebu.

When he returned to his hometown and met his family, Aga’s mother could no longer recognize him.

However, this made Aga even more eager to work hard.

He managed to provide medication to his mother and send his brother to college who then majored in Banking and Finance.

Backed up with his desire of teaching his brother how to handle responsibilities, he asked him to take part-time jobs on one of the fast food chains in Cebu while pursuing his degree program in college.

Among the thousand hopefuls, Aga was one whose dream of having the title ‘attorney’ came true.

Recalling, he said that nobody would approach them, nobody acknowledged them, and nobody lent food to them.

Oftentimes, they were waiting for leftovers from bakeshops for them to eat.

In his journey of becoming a lawyer, Aga encountered unexpected challenges which he thought of not making it.

His mother died in the middle of his bar exam review.

Every time he flips a page of his book, Aga could not help but shed tears; his light was gone – the very reason why he was enduring and doing it.

A day before the examinations, his daughter was admitted to the hospital.

He wanted to go home.

Come examination day, he was nervous.

The bell rang which signalled for takers to start but his hands were shaking.

Time was running, he had to think what to do, and so he stopped, uttered a prayer, and continued.

All he had in mind is that he was a step closer; he had to give it his last best shot.

It was his dream.

(It was my dream [to be a lawyer] even before I went to school… I really wanted to achieve it.)

With grief in his eyes and in the tone of his voice, Aga said his mother should have seen him in the list of passers; she should have witnessed him sign in the roll of attorneys; they should have taken a photo in front of the Supreme Court – because after all, it was for his mom.

(When I passed the bar exams, my mother was not there. She was supposed to be happy because that was the purpose- it was for her.) 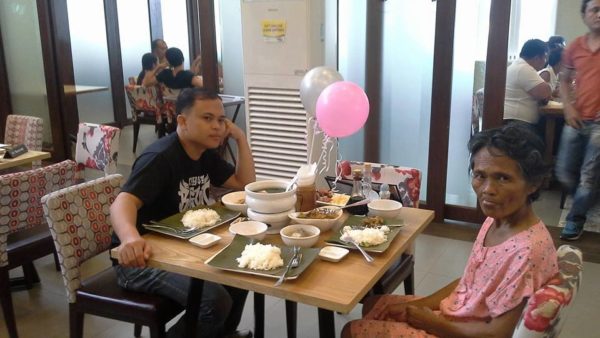 Aga celebrates Mother’s day with his mom in 2016.

It was not a smooth-sailing trip rather a tough one, Aga would say and for him, it was God’s way of reminding him to always call upon His name.

He believed that the people who were there to help him were God’s instruments.

With so much gratitude, Aga said that he is very thankful to the Holy Child, Señor Santo Niño, for touching the hearts of the people who served as bridges towards reaching the star which he thought was unreachable.

When asked of his formula to success, “Be positive and be prayerful,” he replied.

He also reminded the scholars of the Basilica Children’s Welfare Foundation Inc. to not waste the opportunity given to them instead, repay it by doing well in school, in their respective families, and in the foundation.

It all started with Aga’s eagerness to learn and desire to give name and honor to his family.

From someone who was called a ‘no read, no write,’ he is now tagged as ‘Attorney Agapito Suralta Jr.’ | Glimpses