Some things to know about the Gozos or “Batobalani sa Gugma”

Some things to know about the Gozos or “Batobalani sa Gugma” 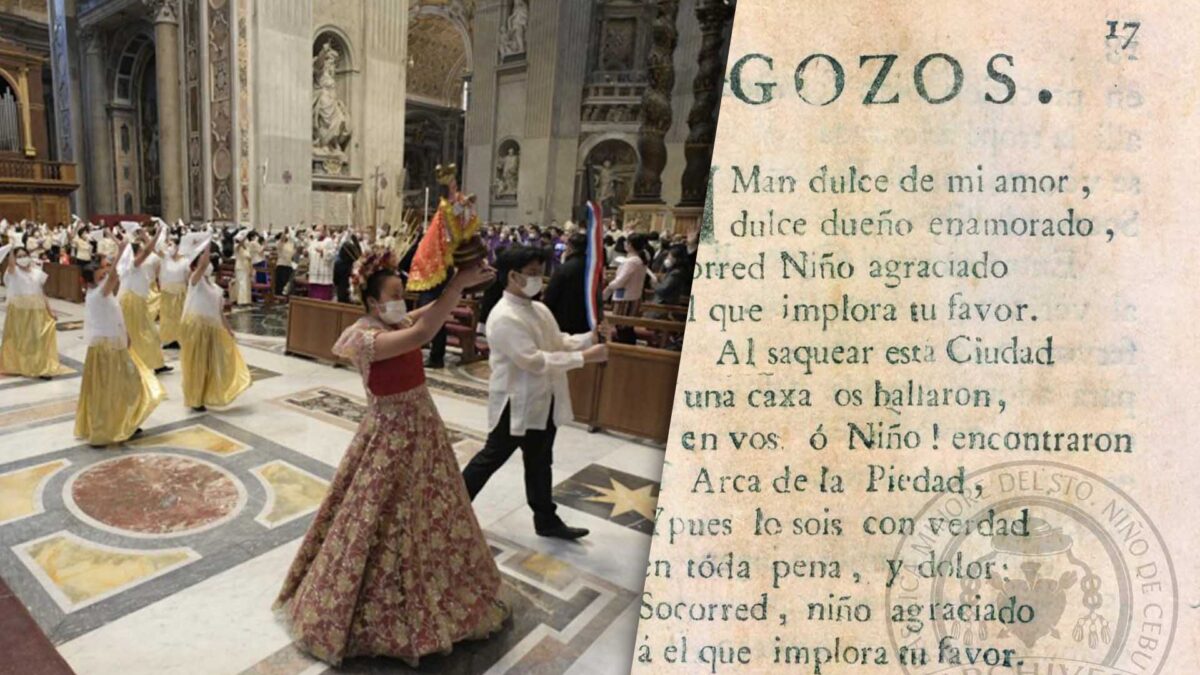 On March 14, 2021, we witnessed the Mass of Pope Francis with the Filipino community in Rome in commemoration of the 500 years of the coming of Christianity to the Philippines. One of the highlights of the Mass was the singing of the “Gozos al Sr. Sto. Niño” also known as “Batobalani sa Gugma”. There are interesting questions cropped up from the faithful about the song.

So what is the connection of the song to the Sto. Niño de Cebu?

Our knowledge about the Gozos is heavily based on the surviving Novenario prints from – the earliest – the late 18th century. It offers us a glimpse of its original form. By far, the earliest we can dig (thanks for the generosity of Archivo de la Provincia Agustiniana de Filipinas in Valladolid, Spain) is the published novenario of 1788. Printed in Manila in the printing press of the Seminario Conciliar y Real de San Carlos by Agustin de la Rosa y Balagtas, the earliest surviving novenario is in Cebuano language. Hence, the Gozos has been in Cebuano in its original form. But the said original version is not the same as with the present form that we are using and what we have heard from the Papal Mass. The first “Gozos” is very embellished and poetic in form. The rendition of the language is of classic example: metered and rhymed. It is in itself a product of a fine poetry. The next Cebuano editions of the novenario (1858, 1888 and 1908) contain the almost unchanged Cebuano Gozos.

Moreover, it is least known to us that there is also an existing Spanish version of the Batobalani sa Gugma. It appeared in an 1809 Spanish edition of the “Novenario Dedicada al Santissimo Nombre de Jesus…” Based on the first line of the Gozos, Batobalani sa Gugma in Spanish is “Iman Dulce de mi Amor” (roughly translated “Sweet Magnet of my Love” or in Cebuano “Matam-is nga Batobalani sa Akong Gugma”. The Cebuano has not been literally translated to the Spanish version.

Additionally, again basing on the available archival materials of the Novena, the other Filipino dialect that translated Batobalani from Cebuano is in Hiligaynon (or Ilonggo as we comfortably refer to the language). It appeared on the 1881 edition (probably the first edition) of the Hiligaynon Novena to Sto. Niño by an Ilonggo diocesan priest from Arevalo, Iloilo City, Don Anselmo Avanceña. The Gozos is identified simply as, quite understandably, “Batobalani sang Gugma”. The Hiligaynon version is a literal translation from the Cebuano. It has another edition in 1886. Avanceña was educated in Seminario de San Carlos of Cebu and even assigned in Cebu Cathedral before he went back to his hometown in Arevalo where he served as a parish priest until his death. Arevalo parish has its titular the “Santissimo Nombre de Jesus” as well. The image is identified as Sto. Niño de Arevalo today.

At present, the “definitive” form of the Gozos we used to sing (and what we have heard from the introit of the Papal Mass this afternoon) has been a product of its simplification around 1980’s with its own present tune. This also implies that the old Gozos was sang in different tunes as it is evident in the surviving old folks in areas especially in Dalaguete and Boljoon, who used different tunes for the Batobalani sa Gugma. Equally, the lyrics had been simplified and did away the classic rhyming and meter. But the thought of each strope represents the older version. (Rev. Fr. Ric Anthony Reyes, OSA, Archivist of the Basilica Minore del Sto. Niño de Cebu)