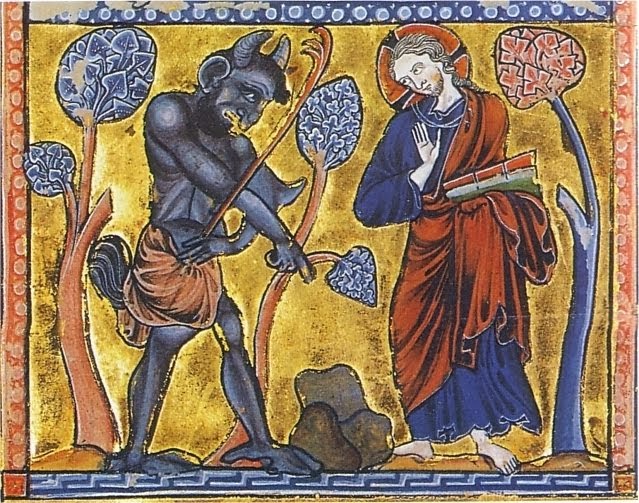 “And lead us not into temptation but deliver us from evil.” I have often pondered over the meaning of those final words in the Lord’s Prayer and I want to pay some attention to them with you today.

Throughout the centuries there has been any number of translations of the original Hebrew words that Jesus used when He taught the Lord’s Prayer. For instance, most of the original translations did not say “And forgive us our trespasses as we forgive those who trespass against us.” Instead the phrase was translated as, “And forgive us our sins as we forgive those who sin against us.”  By the way, as an aside, just when or why the word “trespass” was substituted for the word “sin” is unknown to me. As for the phrase “but deliver us from evil” other ancient translations render it as: “And deliver us from the time of trial.” Still others render it “deliver us from the time of testing.”

That being the case, I want to pay some attention now to the time of trial or testing Jesus endured out in the desert when Satan, our Ancient Enemy, the Evil One, put Jesus to test with those three major temptations we just heard about in today’s Gospel account.

We should note that it was not God our Father who was testing Jesus. No, it was Lucifer.

Why would God want to “test” His Only-begotten Son?” He knew all along what was in His Son’s heart and soul. The Devil, of course, did not and so was testing Jesus who was out there in the desert in the power of the Holy Spirit. It was the Devil who was doing the testing.

Satan claims that the world and all that’s in it belongs to him and is in his power. “I will give them to you,” he exclaims to Jesus, “if you worship me and acknowledge my power.” Note that he is setting himself up as God’s equal. This echoes the Serpent’s original seductive temptation offered to Adam and Eve, “Eat of this fruit and you will be as God!” From the beginning the Devil has been at work testing God’s work in his efforts to ruin God’s creations.
God, in His complete freedom, could I suppose “test” us. Lots of people think of God that way. Many times, when we face trials, troubles, and suffering we immediately tell ourselves “God is testing me.” Or in times of suffering we tell others “God is testing you.” While that might be so, it’s usually a facile response that short-circuits a more insightful awareness.

Many trials and troubles beset us, not only in our lifetimes but daily. What or who causes them? Each and every day people will “test our limits.” How often is your patience tested? And who is testing the boundaries of your patience… of your love? You find yourself tested, tempted to anger and impatience, by members of your own family in your own home. Your children can test your limits. You loyalty and patience are tried and tested in your place of work. We can easily see that while events and chance occurrences can test you and me, there is no greater testing than that which comes to you from other people.

Many such moments of trial and testing come to each one of us in each and every day of our lives. Which, perhaps, is why Jesus teaches us to ask for our daily bread, to ask for that heavenly sustenance that gives strength to our souls as we face the trials of our days.

Good people face suffering from others and are tested by others. In all such moments we are given opportunities… opportunities that are hidden gifts within those trials. The highest and best opportunity in every such trial is to enter into the heart of Jesus. St. Paul in his Epistle to the Hebrews wrote of Christ, “…because he himself was tested through what he suffered, he is able to help those who are being tested.”