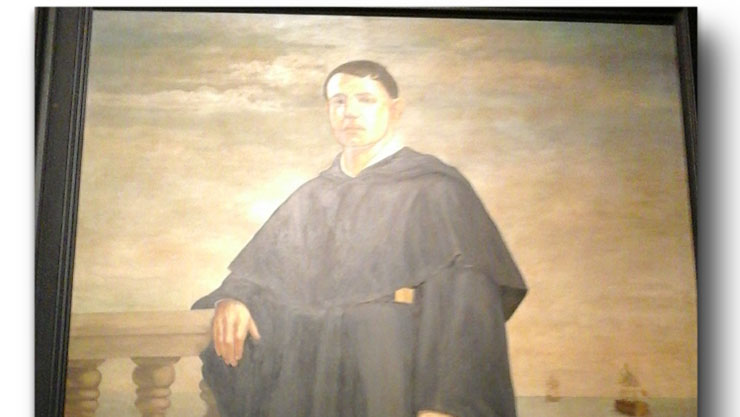 Written on January 16, 1570 and sent from Mexico to Spain, Fray Diego de Herrera, OSA wrote a letter to the King of Spain, Philip (Felipe II).

Fray Herrera also asks the King what his plans for the island of Cebu is, which is declared to be a new colony of Spain. He mentioned to the King the abundance of food, very good port and is a strategic location for defense in the island. He also narrates the hostilities they encountered against the Portuguese who also came to the island asking the Spaniards to leave. When no terms were met, they encountered war against the Portuguese and in extreme measure to find food, the soldiers hunted rats, which are bigger than in New Spain (Mexico).

As to the Christianization of the island, from 1565-1570, there were only 100 people who were baptized when Herrera left for Mexico and at the time he wrote the letter to the King. He also asked the viceroy of Mexico to send rations and help to the Spaniards left in the island.

The notable person baptized was Rajah Tupas, chieftain of Cebu on March 21, 1568.

In the fleet that your Majesty had sent from this Nueva España to the islands of the West, there were among the people some religious of St. Augustine who were in your Majesty’s service. By your order, I was one of them. We had a prosperous voyage as your Majesty will already have been fully informed. The fleet effected a landing, and founded a colony (in accordance with the instructions brought from this Nueva España) in the island of Çubu—as that place abounds in food, has a very good port and is a healthful region, as has been since found by experience; and it is very strong for defense, in any casualty that might befall us. From that place a ship was sent to discover the return route [to New Spain]. It succeeded well, although it appears that some of its men died. The people who remained there have all this time endured very great privations, notwithstanding the richness of the region, because they could make no settlement so peacefully that it was not against the will of the natives. Therefore they were disquieted, and many fled, deserting their towns; and those who remained determined not to cultivate their fields, or to sow, believing that by this stratagem they could drive us from their land. Consequently they and ours have endured very great extremities, because the same thing was done in other islands where the Spaniards went to find food—so much so that many times the natives have taken the food more than four leagues inland, carrying it upon their shoulders, and crossing creeks and rivers with it, with great risk of their lives. Then too another cause of so great distress has been the lack there of boats with oars; and the fact that, up to the present, no one has ventured to seek richer and more abundant lands—which are very near, as Lequios, Japan, and Jaba [Java], therein fulfilling your Majesty’s commands. After all that, came the Portuguese fleet, arriving about the end of September of last year (1569), under command of Gonzalo Pereira. That man, although we made every possible effort for peace with him, would agree to nothing except that, in any case, we must leave these islands, or else go with him. The first could not be done, because we had no ships; nor the second, because that was very ignominious for us. Therefore as we came to no agreement, he determined to begin hostilities, and make war on us, trusting to his numerous ships—although afterward it did not turn out as happily as he thought, as your Majesty will see by the relation which the viceroy sends from this Nueva España.1 The blockade being so long and rations so scant, the poor soldiers were in such distress that they took to hunting rats, of which there are great numbers in that land, and which are much larger than those of España. With all this privation, and the allurements and abundance in the Portuguese fleet, they served your Majesty with as great loyalty and cheerfulness in this war, and in all the rest, as I believe any men in the world have ever displayed in their king’s service. There was nothing which gave them so great pleasure as being ordered to do things wherein they risked their lives. Therefore it seems to me that your Majesty ought to reward their services, because until this present assistance ordered to be sent them by your Majesty (which is very helpful), they have had nothing but two almudes2 of uncleaned rice every Saturday (after cleaning which there remained but one), without receiving any other gratification.

I came to this Nueva España to give information of the great need of supplies there, and of some injuries done to the natives on account of the extremities that the soldiers suffered, and of many other things which seemed to me fitting for the service of our Lord and of your Majesty. I have informed the viceroy of all those things; so that, as he is nearer to those regions than is your Majesty, he may remedy them. I believe that he will remedy them, because he is a good Christian and conducts this business as earnestly as your Majesty would desire. Some of these things I think it will be necessary to submit to your Majesty’s consideration, and I believe that this has been done. They have ordered me to return immediately to the islands, because they tell me that in so doing I shall fulfil your Majesty’s service.

In what concerns the conversion of the natives, nothing has as yet been really done, until we know your Majesty’s will, because so near Çubu there are lands as great and as rich as this, which belong to your Majesty—as China, Lequios, Jabas [Java], and Japan. We have heard that you will order us to go to those places and leave these other islands—which, although they have many mines and rivers of gold, are very ordinary, in comparison with the former. The people there are very barbarous, while those others are civilized. Now that your Majesty’s will is manifest to us, we will commence the work in earnest, because hitherto, only about one hundred persons have been baptised. It will be a very great obstacle to conversions, if the war with the Portuguese continues. Therefore, I beg your Majesty through love of the Lord that some means and expedient be adopted to prevent its continuation; because, besides the great scandal given to the natives, it is a great pity that Spanish and Portuguese, who are so friendly in España, should come here to kill each other, as if they were infidels. I could advise your Majesty regarding everything else in these regions, such as the nature of the land and the nature and conditions of the peoples and what would be most profitable to your Majesty in it. A true relation of everything has been given to the viceroy, so that he may send it to your Majesty. May our Lord keep your Majesty’s royal person in good health and in his service many years, and increase you into greater kingdoms. Mexico, January 16, 1570. Your Sacred Royal Catholic Majesty’s least and humble servant,

1 Evidently referring to the account of these proceeding which Legazpi sent to the viceroy, Marqués de Falçes (See p. 44 ff., ante).
2 The almude is one-twelfth of a fanega, or about 4¼ United States quarts.