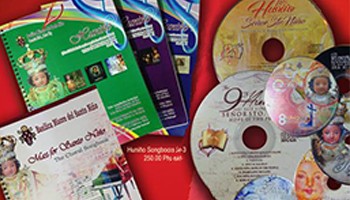 The Holy Infant has long been acknowledged as miraculous by devotees as well as by the Augustinian Order. One ancient miracle attributed to devotion in the Santo Niño involved the venerable Bishop Don Pedro de Agurto, first bishop of Cebu, who died on October 15, 1608, and was buried in the Augustinian Sepulchre. On April 24, 1609, histombed was opened at the instigation of one of his closest friends, and it was discovered that his body was incorrupt and exuded the smell of roses. This was considered miraculous. He was reburied in the sepulcher, where his bones remained until a fire in 1628 raged for eight days in the church, after which his bones were found intact; again, this was considered a miracle. The church was then restored and during the next century, the Holy Infant continued to shower his devotees with divine favors. These daily occurring favors were so numerous that a separate book was required to record them, as done by Fr. Nicolas de la Cuadra (Prior of the convent of the Santo Niño in 1713-1716) in a book entitled “Milagros de Santo Niño”. This books was still conserved in the Augustinian library in 1768, when it was recorded to have been seen, but by the early twentieth century, had unfortunately disappeared. Thus, miracles dating to this period could only be gleaned through the accounts of Fr. Casimiro Diaz and Juan de Medina.

Tenazas wrote of a 1572 epidemic that was checked after a novena to the Santo Niño was held, and the iamge brought around the village in procession. Aguado cites the case od D. Rodrigo de Madrid y Rojas, son of Captain D. Pedro de Madrid and Doña Maria de Rojas. A severe fever had left him in despair, thus his parents made an offering of a golden crown to the Holy Infant, and asked Him for the health of their son, who soon improved, and in a few days, regained his health and sanity.

In 1562, many people in Cebu were killed during a great smallpox plague. They had recourse to the Santo Niño, and took Him out in procession and made a novena, after which the plague stopped. In 1673, there was a seven or eight-year old boy who had a hunchback which he had incurred after a long illness. He could not find a cure for it despite the numerous remedies that had been applied. Thus, the young man, moved by a strong faith in the Santo Niño, went to Fr. Juan Caballero, prior of the convent, and asked his permission to kiss the Holy Image. This request was granted, and the boy, who went to sleep with his deformity, woke up next morning well and stood upright, whereas he had in the past walked folded up, with his hands on his knee.

An account is also given of the cure in 1850 at Fort San Pedro de Victoriano Fanlu y Mambru, a humble and religious Spanish soldier with a “broken tongue”. Unable to fulfill his religious duties on Holy Thursday due to his work obligations, he knelt down at a turret at Fort San Pdro, facing the church of Saint Augustine. He was approached by a young boy dressed like and acolyte, who gave him a cup to drink from, “it was his blood.” The soldier did so, and was immediately cured of his ailment. He felt a flood of knowledge flow into him, and could not only speak intelligibly, but also read and write. It was then realized that this young boy was the Santo Niño.

In 1883, Cebu was ravaged by the worst cholera epidemic in its history for three months. Medical measures could not prevent its spread or contain its effects. The people had recourse to their patron in nightly “auroras” or processions joined in by all. Finally, they took the image of the Santo Niño in procession around the city. Upon the icon’s return to his urna (glass closure), strong winds and sudden downpours engulfed the city. It was a typhoon which effectively wiped out the contagious disease, a deliverance attributed to the Holy Child, acknowledge with a thanksgiving mass held by the Bishop of Cebu. Fr. Bernardino Ricafrente, OSA, also told of how Cebu was once spared from plague and drought after the Cebuanos asked for the Santo Niño’s intercession.

It is said that in 1890, Pawang, a woman from danao, Cebu Province, congenitally deaf and dumb, was completely cured at the basilica when she danced the sinulog during the mass in gratitude for the grdual restoration of her hearing during the past four fiestas. She was a devotee who regularly had masses said. When he was cured, one of these was a special thanksgiving mass.

In 1893, Ignay, a woman from Tagbilaran, Bohol with blurred vision since childhood, also had her vision restored at the basilica after she and her mother fervently prayed for this in a High Mass during the Santo Niño fiesta. While praying, her eyes shed hot tears, after which her vision cleared, prompting much thanksgiving to the Santo Niño from her and her mother. The case is also told of a blind man who had heard of the healing power of the Holy Image; prayed to be healed, and was eventually cured.

Judge Luis Torilla y Matti, a Spaniard living in Leyte, is said to have been cured of leprosy by his sincere prayers for the Holy Child’s compassion, accompanied by wiping his wounds with cloth soaked in the water in which a shirt of the Santo Niño had been soaked. A physician examined him and found him completely cured.

Otik of Baybay, Leyte, had a strange illness which was miraculously cured through the pllication of a cutting from magellan’s cross which was brought to him by a curly-haired child. This child was deemed to have been the Sanyo Niño. The legend of Maestra Patsy, a renowned teacher from Manila, tells of her deliverance by the Santo Niño from her severe menstrual flow. This cure occurred while she was singing during the fiesta High Mass at the basilica.

In 196, a fifty-ve year old woman, Iya Irak, lame from childhood, was miraculously cured at the Basilica after fervent prayers and supplications to the Santo Niño, witnessed by many who knew her. In 1933, a lame child from Badian, Cebu, was also cured when her mother brought her to the basilica. The mother prayed fervently and danced the sinulog before the Santo Niño to implore Him to cure her child, who eventually became a religious nun.

In the 1980s and 1990s, accounts of miraculous medical cures continued. In 1987, Mr. Domingo Nachor was revived from a coma in a hospital in the United States after his wife brought a Santo Niño icon from the Santo Niño de Cebu Society to the hospital, and prayed there for his recovery with some members of the Santo Niño Community.  In 1990, Mrs. Nelly Verba, a Filipino-American in the United States, was scheduled to have a liver transplant. While waiting for the transplant, she attended the Santo Niño novena regularly, and had some friends pay for her at the Santo Niño church in Cebu. The transplant was averted when the doctors who operated on her discovered that her liver was better than the one that was to replace it. Mrs. Verba, together with her husband, had spearheaded the spread of the devotion to the Santo Niño in Solano County, California in 1986.

The Granting of Children

The image of the Santo Niño is known to have granted children to many since early Spanish times, when he was known as El Partero (man-midwife). One legend regarding the Santo Niño’s granting of children to childless couples is the story of Basilio and Ines Abesia of Calbayog, Samar, who one year were able to travel to Cebu in time to attend the procession of the Santo Niño. Throughout the procession, Ines, an obese woman, was finally able to fulfill her great desire to dance the sinulog, after which she collapsed unconscious. While later resting at the basilica, she went into convulsions and was thought to be dying. However, a woman assisted her in giving birth to a child she did not realize she had been carrying. A priest who acted as godfather, baptized the boy, who was named after Jesus.

An American couple, though not Catholic, likewise visited the basilica and sank on their knees in prayer before the image. When next they returned to Cebu, they told friends that they already had a two-year old child.