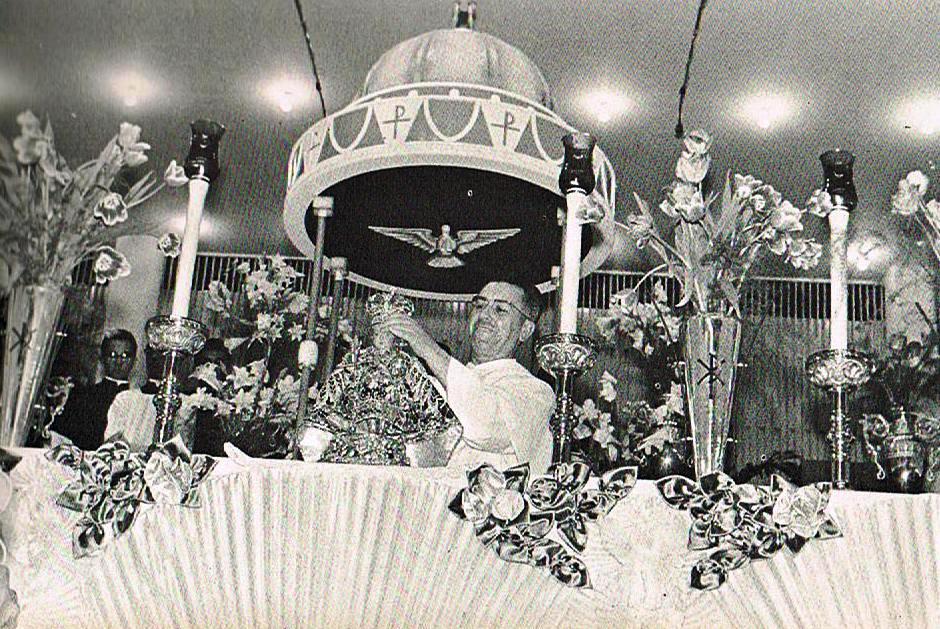 The rite of the canonical coronation of the image of Sto. Niño de Cebu

This article was originally published in The Freeman, printed on January 11, 2015.

Many of us may be very familiar with the event of coronation of religious images such as that of Jesus and of the Blessed Virgin. This is called a “canonical coronation”. Canonical coronations are done so as to acknowledge Marian and Christological images which have significant roles in fostering faith to the people. Usually, they are historically old and popularly acclaimed.

Canonical coronations are favors done by the Pope, expressed through a document called a Papal Bull, recognizing the significance which brings the honor of canonically crowning an image. As we have observed, most of the Marian images venerated under different titles are usually the ones being crowned. On the one hand, only four Christological images were crowned canonically as of the present. One of them and relatively the most recent is the Sto. Niño de Cebu. 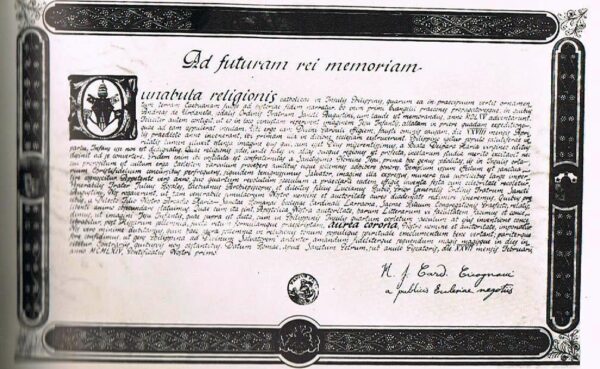 The canonical coronation of the Sto. Niño de Cebu was granted by Pope St. Paul VI through his Papal Bull “Cunabula Religionis” dated February 27, 1964. This favor was requested by His Eminence Julio Cardinal Rosales, then Archbishop of Cebu, and Most Reverend Fr. Luciano Rubio, OSA, former Prior General of the Augustinians. In the joint pastoral letter “The Philippines for Christ” penned by the Catholic Hierarchy of the Philippines, the canonical coronation would take center stage among the highlights of the 4th Centenary of Christianization of the Philippines. 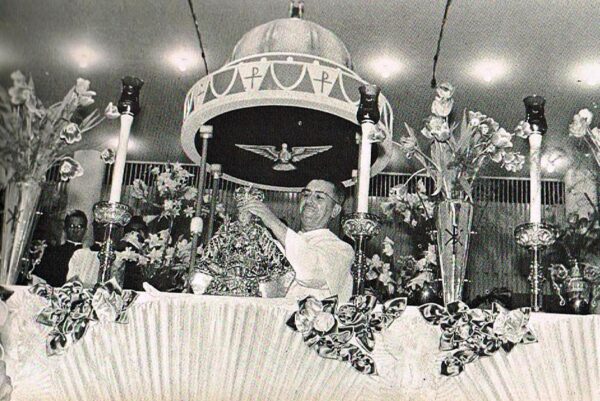 The rite of the canonical coronation of the image of Sto. Niño de Cebu

The canonical coronation of the image of the Sto. Niño de Cebu was done in a very spectacular, solemn and majestic ceremony on the very date of the feast of its discovery (pagkakaplag), on April 28, 1965. The celebration was preceded with a short procession of the image of the Holy Child from the Basilica del Sto. Niño to the port to which it will be sailed by a galleon to the place – part of the present North Reclamation Area – where a templete was built for the event. Arriving to the designated place of the rites, reliving the events four centuries ago, the image was held by Fr. Casimiro Garcia, OSA, Prior of Sto. Niño convent, recalled to us the symbolic association of the icon to the missionary endeavors of the Augustinians as pioneer religious Order to Christianize the country. Then borne by its carroza to the templete, the Sto. Niño presided the procession.

The majesty of the event filled by its solemnity awed many people – the participants of the 3rd National Eucharistic Congress and devotees of the Sto. Niño – who flocked to the six-hectare reclamation area. A procession preceded by laced-surplice ministers with their ceriales and incense and members of the clergy wearing the olden custom of their black berretta. The rite of coronation was then witnessed as the Papal Legate Ildebrando Cardinal Antinuitti with Fr. Casimiro Garcia, OSA solemnly placing the golden crown of the Sto. Niño on its head uttering prayers from the ritual of coronation. The solemn coronation was then followed by the grand opening of the 3rd National Eucharistic Congress presided by the Papal Legate. In his exhortation, the Cardinal asked the people to “recognize the Kingdom of Christ to which you consecrate yourself, has truth as its treasury, charity as its secret, sacrifice as its strength.” Under the mantle of our beloved Patron, Protector and King, we are asked to be witnesses of Christ to the world.

The canonical crown of the Sto. Niño de Cebu was crafted in Spain. According to the Souvenir Publication “Fourth Centenary of the Christianization of the Philippines,” the crown costs P20,000.00. Prominent among the features of the crown is the pearl that is sported in its frontal side. It is a potent symbol of the “Pearl of the Orient Seas” which is no other than the Philippine islands. The icon of the Sto. Niño is not only the representation of Christ Child in whose childhood, we venerate and imitate the mystery of Christian humility. Undisputedly, the image has been since the collective symbol of the Christianization of the Philippines, the history of the Filipinos’ acceptance of Christian faith. 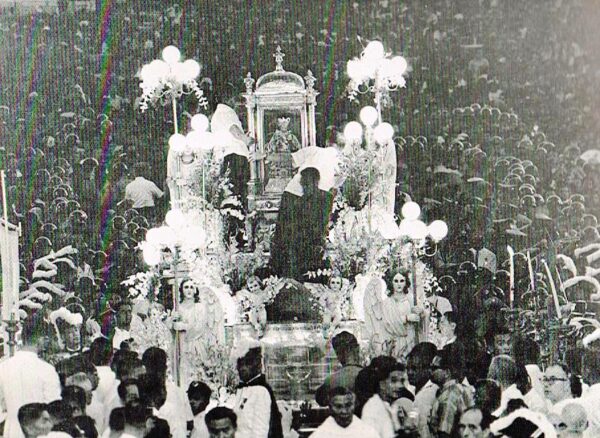 The image of Sto. Niño de Cebu carried on his carozza during the 1965 4th Centennial celebration of Christianity.

That is why, we cannot let pass the memory of this canonical coronation of the Holy Child because,  more than half a century ago, we keep on beholding the image of the Sto. Niño where the humanity and the divinity of Christ is enshrined in the splendor and the humility of the Child Jesus. Moreover, in the image we also see the encounter of God and man where, 450 years ago and still unfolding, many wonders of God are happening and touching the lives of many people. Christ indeed has been our Proctector and King because we find hope each time we lookup to the icon. And now that we, who opened ourselves to Sto. Niño, have let ourselves be found by God, may our lives indeed be found by Him aflame with the faith which we received 450 years ago.