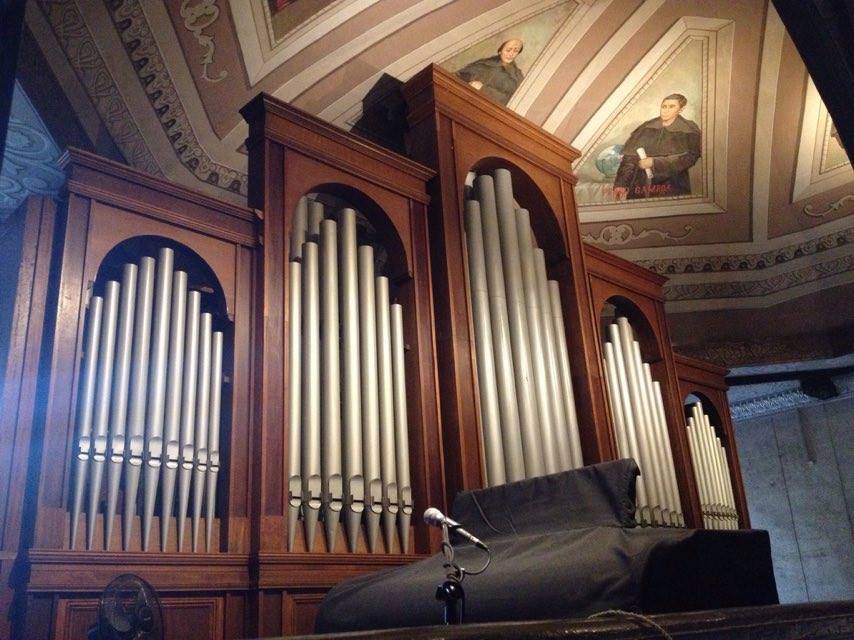 A post-graduate student in music visited the Basilica hoping to validate data obtained from sources that way back in the colonial times the Church of Santo Niño in Cebu served as a training center for organists from the different parishes administered by the Augustinian friars. It is not surprising at all to corroborate the information on hand. The Church and Convent of Santo Niño, since the earliest foundation, has been the premier house of the Augustinians in the Visayas region. Being the strategic hub of the missionary activities it was actually designated, among other functions, a grammar school for its new missionaries in the islands. Like all other religious orders the church and convent functioned as well as doctrine school. Aside from doctrinal matters, music lessons and playing wind instruments were included in its informal studies. It was not however, a foreign venture for the locals who were proficient in the field of music and other artistic forms as part of their ordinary cultural expressions. Historians have noted that there were already Filipinos who demonstrated excellence in their musical aptitude as early as the 17th century. For instance, a lay sacristan-musician of the Augustinian convent in Manila was a proficient orbanist-instrumentalist, choir master, and brilliant composer of choral pieces. 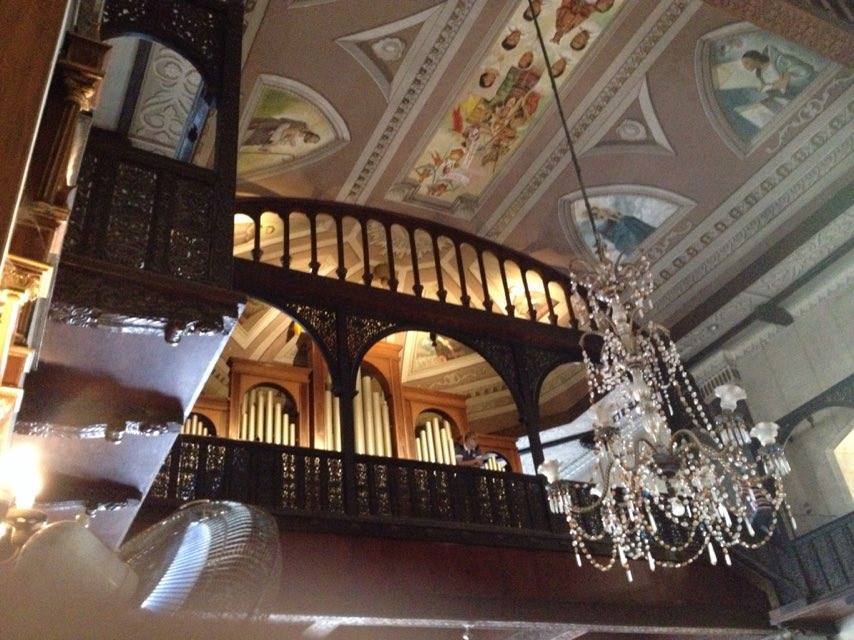 The first and small standard church organ was donated by the Bishop of Cebu Protasio Cabezas (11th Bishop of cebu, t. 1741-1752) in 1755 but was sold to the (diocesan?) seminary in 1875. The oldest pipe organ of the Basilica was probably installed from the late 1700s up to early 1800s. It resembled a typical Spanish inspired pipe organ based on printed photographs. The symmetric design of the horizontal trumpets, according to Cealwyn Tagle, is interestingly similar with the San Agustin Church pipe organ in Intramuros that was installed in 1810. Cealwyn Tagle, owner and general manager of Diego Cera Organ Builders, Inc., published on the restoration website of the Basilica pipe organ an excerpt of an article titled “Organs in [the] Philippines Are Visited on Tours by Woman Organist,” published in the American magazine The Diapason (1942). The extract of the article contained the narration of her visit to the Basilica and description of its pipe organ which significantly provide the unknown historical data.

“The most famous spot in Cebu was the monastery and church of Santo Niño. In the robbing-room of this ancient church the padre reverently opened a chest and displayed for us the precious figure of Santo Niño, the Holy Child Jesus. Of carved wood and twenty inches tall, this sacred relic had been presented in 1521 by Magellan to the wife of the native chief to replace her pagan gods upon her acceptance of Chrsitianity. This figure was mounted on a carved silver throne and was adorned with solid gold crown, a jewel-studded robe and strangely enough, gloves also of gold. Indeed, this small image was one of the many evidences of the early efforts of the priests who brought their religion, their cultural arts and their civilization to this distant land.

Once again, I found a secluded stairway and entered the ‘holy of holies’ where another quaint organ wwas still used. This too was older than any I had seen in Manila. Neither the name of the marker nor the date was recorded on it, but the guide later said that it was probably built in 1730 by  Spanish priests. It had one manual of five octaves and four notes and was pumped by hand. The one-octave pedal board had, instead of iron bars, iron knobs placed in the arrangement of a keyboard. The name of sixteen stops were so indistinct that some could not be deciphered. The ones that were visible were Trompeta, real, tromp, mar, cornet, aealois, pipano, Octavian, occtava, viol, octava (pedal), utuvala pida (?) and quincena. On the quaint music rack lay an antiquated manuscript of unmetered mass music. 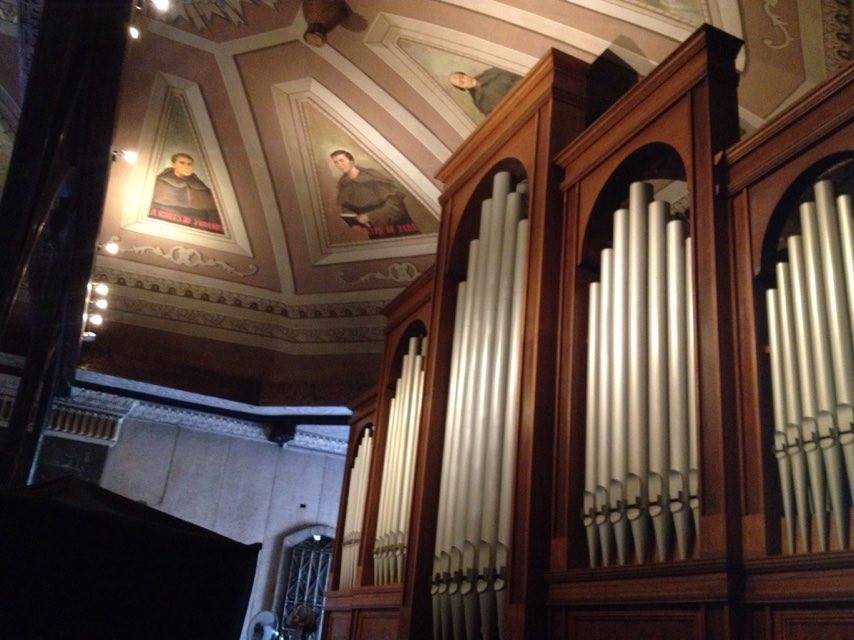 In the belfry of this interesting olf church there were six large bells. The huge one in the corner dated 1750. The others, evidently memorials, bore dates of 1826, 1850, 1886, 1910, and 1930. The present church edifice antedated the oldest bell by fifteen years, for it had withstood all storms and earthquakes since 1735. The two previous structures had been destroyed, one by fire in 1565 and other other by earthquake in 1645. The ornate beauty of this historic church, unsurpassed by that of the Manila churches, was enhanced by the elaborating altar, with its carved figures pyramiding to the ceiling, the chandeliers with their crystal prisms of blue, amber and white, the etched hurricane candle shades of exquisite workmanship from Paris, and many excellent oil paintings.”

The historic pipe organ occupied a special organ loft (a ‘swallow’s nest’) that extended from the side loft entrance from the convent up to the choir loft. Unfortunately, the organ was unceremoniously dismantled, albeit temporarily, to give way to the major renovation of the Church and convent for the fourth centennial commemoration of Philippine Christianization in 1965. Immediately thence, a plan to replace the removed pipe organ. In oneness with the celebration of 400 years of Augustinian presence in the Philippines, the General Curia of the Augustnian Order in Rome shouldered the cost of the new pipe organ of Santo Niño acquired in Germany.

Actual total cost of the pipe organ amounted to 68,466.73 pesos, inclusive of the shipment, insurance and installation. The installation was supervised and directed by Jose Loinaz, the official representative of the Laukhuff Orgelban, Weikersheim (August Laukhuff of Wittendberg) of the former West Germany. It was shipped through the international freight forwarder West Ludwig of Hamburg through M/S Benvravkie of the Ben Line Steamers Ltd., on July 25, 1967. The 27 cases containing the different parts of the church pipe organ weighing 6,902 kilograms arrived at the port of Cebu on 28 September 1967, two weeks ahead of the expected arrival.

Interestingly in 1966, the Augustinian friars imported an organ “Golden Voice III” with ranspositor, and the “Organeta Trovador 49/3/5” (with case) in the amount of $ 721.00 from Enrique Keller of Zaurus (Guipuzcoa) Spain.

The Archbishop of Cebu, Julio Cardinal Rosales presided the solemn blessing of the new pipe organ on 22 February 1968. The inauguration was capped with a grand musical night dubbed as El Concierto Religioso de Organo y Coro with Edith A. Dizon as guest organist. She was educated in Music with emphasis on Organ performance, and trained in the U.S. and Geermany through scholarship grants. The artistic Chorus of the University of San Agustin – Iloilo, under the tutelage of Fr. Santiago Escurra, OSA, travelled to Cebu for the first time for the occasion. From the home turf, the Choristers of the University of San Carlos and the Schola Cantorum of San Carlos Seminary completed the line-up of performers. Since then, churchgoers marveled at the beautiful music during liturgical celebration but gradually faded partially due to lack of trained organists and interest in pipe organ playing. 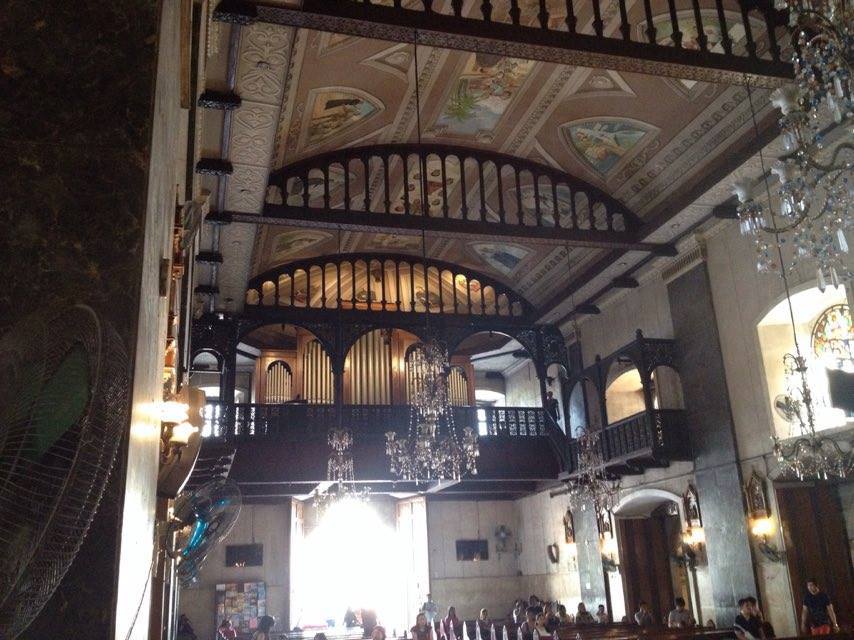 The Basilica community agreed to restore the existing pipe organ in 2009 when Fr. Medardo Durmiendo, OSA proposed it. Diego Cera Organbuilders, Inc. of Las Piñas City was commissioned for the restoration works that lasted for more than a year. (The pipe organ company was named after a Recollect friar Diego Cera, who constructed the world-famous bamboo organ during his term as cura parroco of Las Piñas from 1797-1831). The pipe organ was finally blessed and inaugurated on April 27, 2011. The launching was incorporated into the 5th Huniño Finals Night with the accomplished Armando Salarza as guest organist. He specialized in organ concert performance, choral conducting and composition, among others in Vienna, Spain and United Kingdom. The international organist stunned the audience with his performance of “fanfare in D Major” by Belgian organist/composer Jacque-Nicolas Lemens (1823-1881). Professor Salarza is the artistic director of the Las Piñas Boys Choir and faculty member of the University of the Philippines College of Music.

The occasion was also graced by the University of the Visayas (UV) Chorale whose repertoire ranged from classical music to popular Visayan songs. Rev. Fr. Arnel A. S. Dizon, OSA

Priors and Rectors of Sto. Niño Church/Basilica since 1565