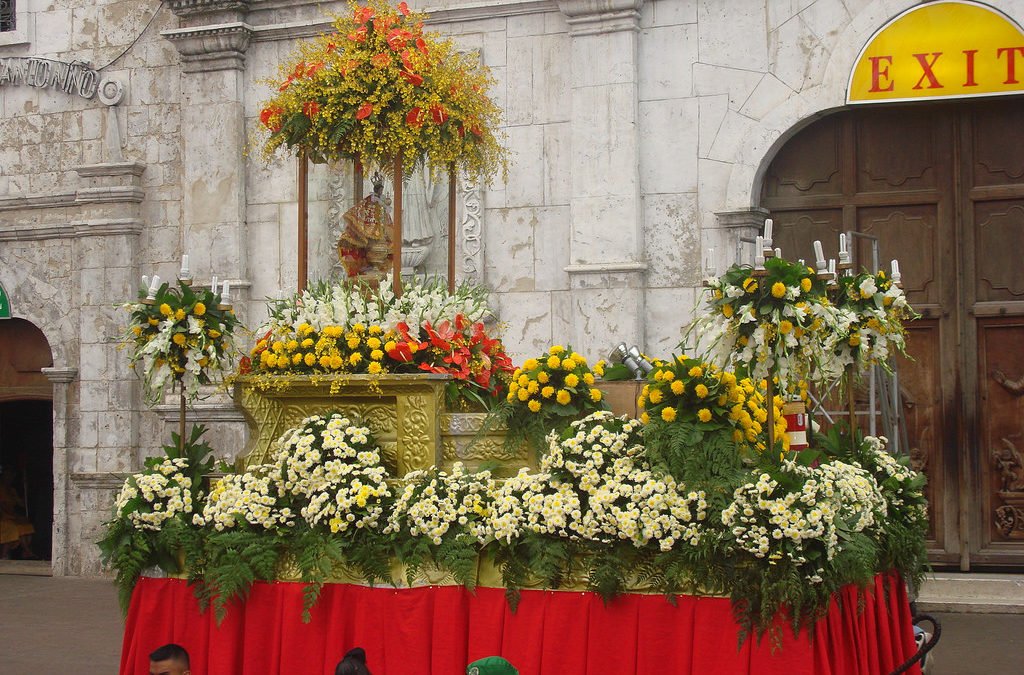 A day before the feast of the Sto. Niño, a solemn foot procession is honoured in the name of the Holy Child. While the image is on procession, another image of Sto. Niño arrives at the Basilica that comes from San Nicholas Church (an Augustinian built church). He stays until the original image returns to his home church. Most devotees of the Sto. Niño do not know why another image of the Holy Child is to be placed at the Church. What do you think is the reason of this tradition? This tradition dates back to the time when the original image was awarded with a Spanish military rank of Excelentisimo Capitan de las Fuerzas Españolas en Filipinas.

However, to better understand this tradition let us visit the book of Rev. Fr. Pedro G. Galende, OSA, who wrote a detailed research on the tradition. The following text below is an excerpt of his book Santo Niño de Cebu, 1565-2015, 450 years of History, Culture and Devotion, which was published in 2016.

The land use for construction

According to Gaspar de San Agustin, “the general donated to the Augustinians an ample piece of land for the construction of the first convent and the church where the image had been found.” Fr. Medina believes that the land “is one long block on each side [and] is the largest in the city and the most beautiful. The cloister is very spacious [with] plenty of rooms.” Although the natives were at first afraid to meet with Legazpi because they feared retribution for the death of Magellan, they finally warmed up to him and sked for pardon. But they were told that for their “fears [to] be appeased,” they needed to convince Rajah Tupas, their chieftain, to show up and sign a peace agreement.

They came back “filled with gifts” to win his friendship until Tupas finally appeared to become a Spanish subject along with his followers. The general began securing a foothold in the islands with the establishment of a city called the Most Holy Name of Jesus. He built a fort to protect the colonists from native attacks. It was shaped like a triangle, following the suggestion of Fr. Urdaneta, whose word on the matter was respected as he was “an old soldier with great experience.”

Upon the request of the Augustinians fathers, the site of the chosen for the church and the convent was where they had found the image of the Child Jesus. But the exact location became a controversial subject when Fr. Medina, later prior of the Santo Niño convent in cebu, claimed that the buildings did not stand on the exact site but rather close to it.”

But according to Dr. astrid Sala-Boza, “the other church” that Fr. Media was referring to is in fact the church that became the Cebu Metropolitan Cathedral. It was constructed in accordance with Legazpi’s order to establish a house of worship for the general population. This was not built on the site where the image was found but it served as the temporary home of the image in the beginning. On the day the image was found, it was taken in procession to this church.

According to Blair and Robertson, “the sites for the Spanish quarters and the (major) church were chosen. The site of the house where the sacred image was found was selected on the site of the Monastery of the Name of Jesus and (concomitantly) the Church (of the Santo Niño)… from the said house the Child Jesus was brought to the major Church in solemn procession with great devotion and rejoicing.” It was not until 1598 when Cebu’s first bishop, Bishop Agurto, officially founded the cathedral and assigned clerics there to minister to the Spaniards, leaving the Cebu natives under the administrator of the Santo Niño Convent.

Sala-Boza believes that “a correlation of these data with the documents cited by Rodriguez shows that the site of the present Basilica del Sto. Niño is indeed the site of the finding of the image.” She also concludes that “the probability of the first procession took place in what would have been the temporary church built on a site other than the site of the finding of the Holy Image, namely the church which was eventually to become the Cebu Metropolitan Cathedral. Who writes that “the icon was solemnly taken in procession to a church, which had been set up in a bower of branches with a covering of hay while the principal church was being constructed within which [the image] is being venerated today.” This account is confirmed by a notarized document chronicling the finding of the image, which is not questioned by noted historians such as Rodriguez, Esteban de Salazar, and others.

Sala-Boza clarifies the sequence of events that took place in the procession:

second, he marks the site of the finding;

third, the image is brought to Mateo del Saz at the flagship to show it to Legazpi;

fourth, the image is taken in procession from the ship back to the house where it had been found;

sixth, the temporary church (chapel) was near the house where the image was found, the place in which the principal church of the Holy Name of Jesus was later constructed.”

The procession thus started at the shore where the ships were anchored. The image was taken aboard every ship after its finding, and a temporary chapel was made in a bower of branches.

According to Medina’s account, the procession headed toward the Augustinian church with the statue. From the Augustinian convent, it proceeded to the major church where a mass was held. Definitely, the procession took place only after the official signing of the documents guaranteeing the return and the entrustment of the image to the Augustinians. After the mass the image was taken back to the Augustinian convent. Therefore, although the route of the first procession appears to have been from the shoreline to the site of the house where the image was found, it maybe deduced that early processions commemorating the finding brought the statue from the Augustinian Church to the Cathedral. The contemporary route established in the 1980s takes the Santo Niño from the Basilica to the cathedral, then to San Nicolas, possibly in keeping with a strong oral tradition (actually a counterfactual) on the finding of the image there. Sala-Boza’s work is considered a collection of historical, archeological, and geographical evidence which primarily establishes the already well-known legality and historicity of the location of the Santo Niño Church as the same site where the image was discovered; it is not in today’s Barangay San Nicolas. She also discusses another contemporary Santo Niño procession, which takes place on the third Sunday of January and ends with the transfer of the Santo Niño from San Nicolas to the Basilica of the Santo Niño, the counterfactual that the image was found in San Nicolas. With the growing renown of the miraculous icon, the Santo Niño was honoured with the ceremonial Spanish military rank Excelentisimo Capitan de las Fuerzas Españolas en Filipinas. As captain general, the basilica was his headquarters. During his feast day, the Santo Niño has always left the basilica in a procession, thus vacating his headquarters. Spanish military tradition required that a commanding general’s headquarters must never be left unguarded. Thus, the tradition of bringing our the Santo Niño de Cebu for the annual fiesta procession required the appointment of a teniente general, a rank lower than captain general, which was given to the Santo Niño of San Nicolas. Known as El Teniente, this image has the main duty of standing guard as second in command in the Basilica whenever the Santo Niño goes in a procession and on a few other occasions when it leaves the basilica under extraordinary circumstances. 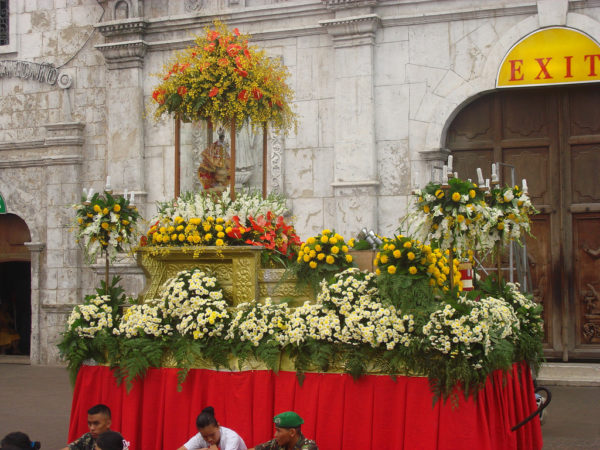 One such event occurred when it was taken to Manila in 1965 for the closing ceremonies of the fourth centennial of the Christianization of the Philippines. This Spanish military tradition does not in any way imply that the image was found in San Nicolas. Neither is it about the re-enactment of the first procession which brought the Santo Niño from what some people claim is the actual site of the finding of the image in San Nicolas. Rather, the visit by the icon from San Nicolas to the basilica on the feast of the Santo Niño is a sign that the Santo Niño icon, although not physically present at the basilica, remains in command on that day. Over the years that followed the convent would serve as the residence, infirmary, and retirement home of the priests. Only two Augustinians were assigned to the convent during the early years; a priest who served as prior and a professed brother. Adjacent to the convent was the Magellan’s Cross which the natives venerated with greatest devotion. This cross became a symbol of peace which eventually led to the amalgamation of Western and Eastern cultures as the Philippines evolved into the only catholic nation in Asia over four centuries. The Cebu City hall or ayuntamiento was among the most important foundations of the colony and its alcaldes mayors became the pillars of the community after the grant of a royal cedula by Philip II. By the time he settled in Cebu, Legazpi had travelled a distance of 2,060 leagues after taking possession of Guam and reaching Samar, Leyte, Camiguin, Mindanao, and Negros. He had also concluded a historic blood compact in Bohol, where today he is remembered with a bronze statue on the where it took place. The sangrarse (blood compact) was a native ritual that sealed a peace agreement. A few drops of blood were taken from each of the two principal participants usually from their arm or chest to mix with wine. By drinking this mixture, the signatories entered into a lasting pact of friendship.