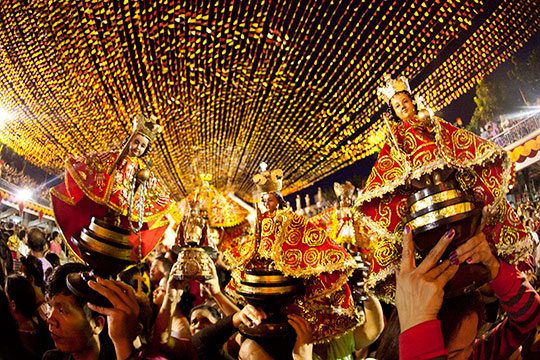 As the carroza of Señor Santo Niño leaves the maingate of the Basilica for the foot procession, another carroza bearing another Santo Niño image enters the church compound. This is always the ritual that is being followed year after year during the Saturday Solemn Procession, the highlight of the Fiesta Señor.  The image that leaves the Basilica is the Capitan General (Captain General) while the image that enters is the Teñente General (Lieutenant General) from the nearby San Nicolas Church.

According to the research conducted by Dr. Astrid Sala-Boza, the corwn and scepter symbolizing the royal rank of the Santo Niño carries with it themilitary rank of Celentisimo Capitan General de las Esfuerzas Española en Filipinas (Most Esteemed Cpatain General of the Spanish Forces in the Philippines). In colonial times, the Santo Niño as Captain General was honored with a 21-gun salute during His annual fiesta.

His military rank has its own corresponding symbols. The coat-of-arms, the double-headed eagle based on Charles I’s emblem; the Toison de Oro (Order of the Golden Fleece); the red ceremonial cloak or cape and the cannons that symbolize His rank; the sash and belt studded with old Spanish coins signify his rank as Captain General.

Military protocol dictates that when the commander eaves his camp, he has to be replaced by his second-in-command officer. There should be no leadership vacuum under any circumstance. This changing-of-the-guard ritual is depicted when the Captain General (basilica) departs the Basilica (camp) and the Teniente General (San Nicolas) comes into the Basilica.

The Philippine Navy through the Naval Forces Central (NAVFORCEN) based in Mactan Island recognizes the honorary rank of Captain General (Lord admiral of the Sea) and accorded naval honors to the Santo Niño on April 28, 2011 on the occasion of the 446th Kaplag Festival. The Kaplag  commemorates the discovery of the miraculous image of the Child Jesus on April 28, 1565 by Juan Camus, a soldier of Miguel Lopez de Legazpi, in a nipa hut in Cebu on the very spot where the Basilica stands today. The same image is believed to be a gift of Ferdinand Magellan to Queen Juana 44 years earlier (1521). 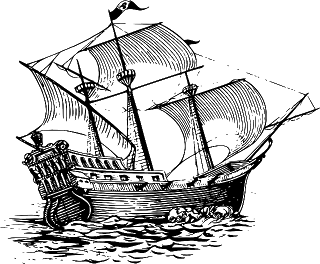 The ceremonies started with a 6 a.m. Eucharistic celebration, La Misa en honor de Capitan general (Mass in honor of the Captain General). A foot procession called El Camino del Capitan General (The way of the Captain General) followed afterward from the Basilica to the Malacañan sa Sugbu, the erstwhile ceremonial seat of the national government in the Visayas. The image was borne by naval personnel in their white gala uniforms, cordoned and guarded by a company-size marine reserve unite assisted by the Basilica Security Group. In the image is the flag of the El Capitan General, the double-headed eagle, unfurled for the first time. The 2011 Hermano and Hermana Mayores, Mr. and Mrs. Calvin and Jessica Discaya with the Augustinian friars, priests, religious sisters and devotees joined the short procession. Police cars, motorcycle cops and CITOM personnel provided added security and eased the traffic.

At the Malacañan sa Sugbu, a patrol craft, the RPS Heneral Emilio Aguinaldo which is the first Philippine-made navy ship was waiting Upon arrival, naval honors called “side boys” were given as El Capitan General  boarded the naval vessel. The flag of the Santo Niño was then hoisted. This was the first time that the coat-of-arms of the Celentisimo Capitan General de las Esfuerzas en Filipinas was flown by a Philippine Navy ship. A Coast Guard ship and a civilian yacht were also parked alongside the navy ship as part of the convoy. The Coast Guard closed the Mactan Channel for the occasion.

As the RPS Heneral Emilio Aguinaldo departs Malacañan sa Sugbu, ships docked at the pier blew their horns and dipped their flags as El Capitan General passes in front of their ships. Maritime tradition requires all vessels to lower their flags as a sign of respect.

Naval and Coast Guard vessels rendered passing honors, the highlight of the day’s activity, as the Santo Niño makes way towards Naval Base Rafael Ramos. This tradition of giving military honors to Señor Santo Niño as Capitan General was celebrated by Spanish forces in the Philippines similar to the Our Lady of La Naval fluvial parade until the turn of the century. The La Naval is still observed by the Navy.

El Capitan General was welcomed by the Navy top brass of VANFORCEN headed by Comm. Cyril Carlod. Upon arrival, a single canon (105 mm howitzer) salute was rendered. Another foor procession brought the image from Naval Base Rafael Ramos pier to the Navy Chapel inside the Navy compound. This was followed by another Misa en honor del Capitan General and for all seafarers and protectors of the sea. It was officiated by the Military Ordinary, His Excellency Leopoldo S. Tumulak, D.D., concelebrated by Augustinian friars and Military Chaplains. Specifically invited are the navy, coast guard, ports police, maritime police and heads of bantay dagat in the whole region. A public veneration was held at the Navy Chapel from 10 a.m. to 3 p.m. and therefore, the public especially the parishioners from Lapu-Lapu, Cordova and Mandaue may gain access to the Base on that day. After lunch, a surprise presentation was performed by the Huniño Grand Champions of 2010 and 2011, respectively.