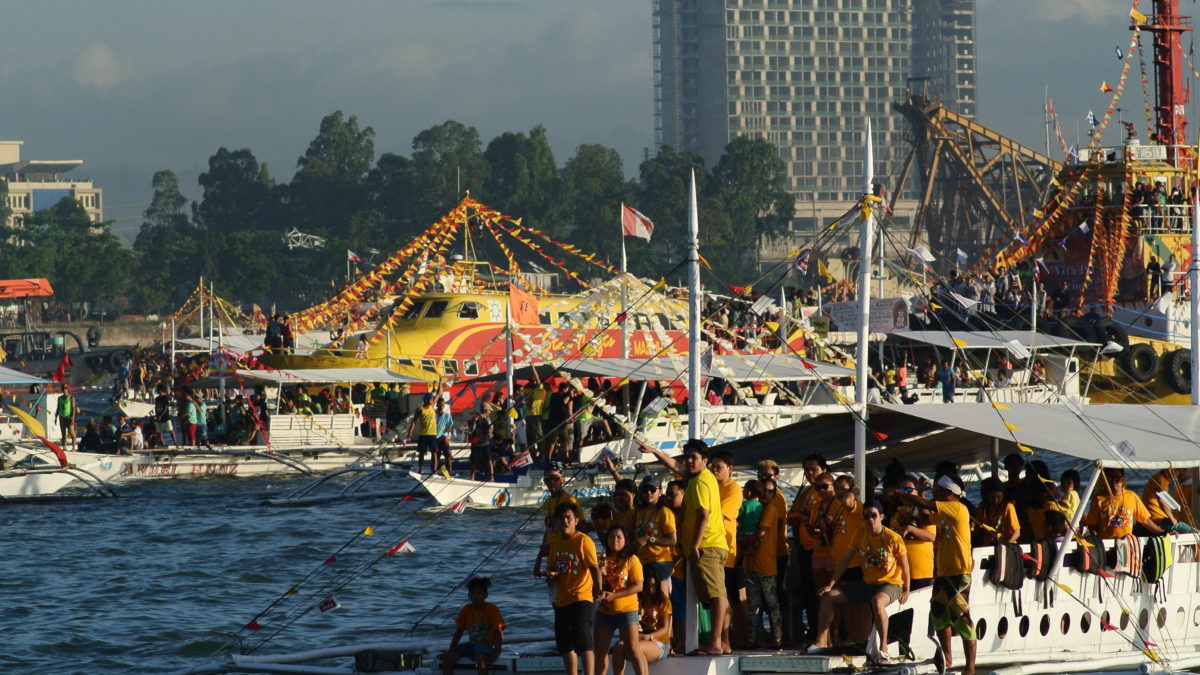 San Agustin notes that Magellan’s expedition “discovered the mouth of the cove of Cebu called Mandaue on 7 April at noon in 1521.” The fluvial parade, a civic celebration started in the early 1980’s re-enacts the arrival of Magellan’s galleons bringing the image of the Santo Niño to Cebu, with performers portraying Queen Juana carrying the image and King Humabon and the Spanish settlers taking the Image by sea from port of Mandaue to the port of Cebu.

Held on the Saturday morning before the Sunday feast of the Santo Niño, the fluvial parade has become one of the highlights of the annual feast.

Hundreds of thousands prepare themselves as early as 5:00 in the morning to embark on sea craft or assume terrestrial vantage points as onlookers. The blowing of sea craft horns at 7:00 in the morning marks the start of the parade. Fr. Ambrosio Galindez, OSA prior of the Augustinian community in Cebu, clarified in a newspaper article that while devotees mistake the parade as a “procession,” the activity is actually a “parade” which is both religious and civic in nature. The only religious factor is the presence of the replica of the Santo Niño, and icons of Our Lady of Guadalupe of Cebu, and Saint Joseph, the patron saint of Mandaue.

On the Friday prior to the parade, the replicas of the images of the Santo Niño and Our Lady of Guadalupe are brought by motorcade to Saint Joseph’s church in Mandaue City in what is known as the annual traslacion prior to the fluvial parade. The five parishes of Mandaue City welcome the visiting Images with the pealing of church bells, while Mandauehanons (residents of Mandaue), who live along the motorcade route decorate their house fronts. There is then a Misa de Traslacion (Mass honoring the Transfer), and a vigil at the church. In early years, starting at 3:00 in the morning the next day, Saturday, Diana (reveille; daybreak) presentation of higantes (giant and giantless figures) paraded through the City of Mandaue followed by a Mass at 4:00 in the morning, then a foot procession from the church to Ouano wharf for the fluvial parade. The use of Ouano private wharf and yacht (named Señor Santo Niño) has been the political family’s offering to the Santo Niño since 1983; their private yacht is used exclusively for the purpose of the fluvial parade.

In 1986, the “fluvial” included about 15 gaily decorated vessels, while hundreds of participants met the image at the pier and danced their way to the Basilica to escort the Icon. By 2003, the fluvial parade marked its nineteenth year, and a flotilla of about 112 boats joined the parade, which never failes to draw crowds and cheers. Helicopters shower confetti, ships sound their bullhorns, people onshore light firecrackers and release balloons. The image is now met at the pier by numerous devotees, as well as some groups who authorized by the Basilica to perform the Sinulog, these latter groups have been limited due to considerations.

The Cebu coast guard closes the Mactan channel to public sea crafts for four hours to give way to the fluvial parade which, however, in 2003, had a few minor accidents among some unregistered participants. The fluvial parade ends at the Cebu City Pier I, after which a procession takes the replica of the Santo Niño from the pier to the Basilica. (Astrid Sala-Boza).