The Lost Icon of Cebu… The Ecce Homo

The Lost Icon of Cebu… The Ecce Homo 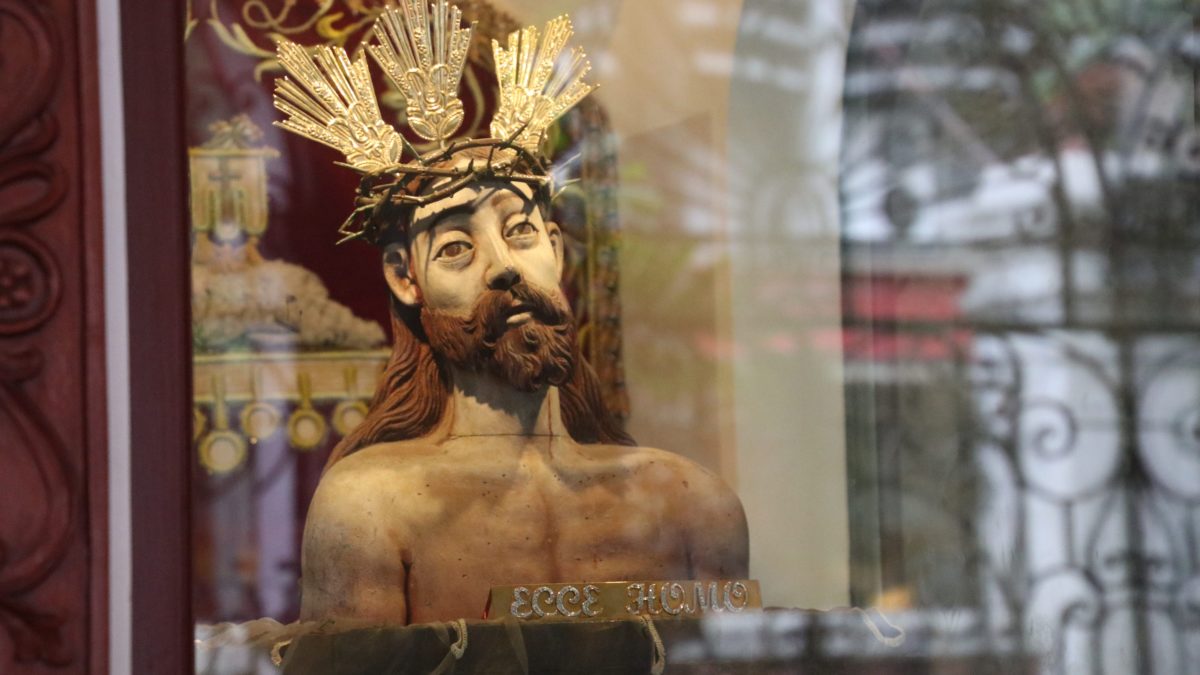 Ecce Homo means “Here is the man!” or “Behold the man!” (John 19:5). It is the exclamatory statement of Pilate in a mock trial when Jesus was presented to the people “wearing the crown of thorns and the purple robe” as derision to the “King of the Jews.” The fearful Pilate found no case at all against Jesus, yet was forced to give in to public clamor to avert unrest to safeguard his political clout.

The Ecce Homo is considered one of the three distinct religious-cultural –historical icons of Cebu, which include the Santo Niño and Magellan’s Cross. However, it is the least known among the three ancient representations mainly owing to its “disappearance” for 46 lengthy years from the view and devotion of Cebuanos, in particular to the younger generations of today.

On August 20, 1572 the wooden bust of Jesus Christ was miraculously discovered in an early settlement of Sugbo. The historic event coincided with the death of Adelantado Miguel Lopez de Legazpi in Manila. Historian Fray Gaspar de San Agustin, OSA recounted in his Conquistas de las Islas de Filipinas (Madrid, 1698; Manila, 1198) how it was unearthed in a burial site of a famous and ancient leader named Rjah Carli, believed to be among those baptized during the arrival of Ferdinand Magellan. A certain soldier Juan de Castilla uncovered the casket of the chieftain while digging the ground to lay down the foundation of his house. Surprisingly enough, the Rajah’s body was still in a recognizable condition after many years of entombment. Fray Gaspar de San Agustin’s narration on the finding of the Ecce Homo described the bust’s precise location in evocative detail. It was devoutly placed on rajah’s chjest in excellent form, contrary to some accounts that it was positioned on the side of the cadaver. A small cross was also found held piously in his hands. Such orchestrated precision undoubtedly signified the Raja’s faithful state to the newly-embraced Christian belief while still alive. Or most likely, it was an indication of his family circle’s loyal adherence to the same Christian faith they had already accepted wholeheartedly. Also, it is logically fitting to infer that it was a ceremonial tradition carefully observed by his local court that was religiously followed in the burial rites of a similar personality or even a tribal elder. The foregoing assumptions were common cultural practices in accompany and preparing a departed individual towards the next life. This shared belief has persisted among different cultures, faiths and people down to contemporary times. The wider extension of the incident implicitly revealed further the flourishing evangelization efforts of the Augustinian missionaries that pioneered in the systematic spread of Christianity in the islands which originated in Cebu.

The people and authorities then, out of gratitude and reverence, brought the Ecce Homo “with great devotion to the church of the Holy Child [the olden Santo Niño Church of the Augustinians which is the present-day Basilica del Santo Niño], and placed it on the tabernacle itself.” The same author in the preceding citation acclaimed the discovery as one of the many gifts and privileges God had bestowed to the city [Sugbo or Cebu] “with similar mysterious discoveries,” unmistakably referring to the providential finding of the image of Santo Niño in 1565 (a historical certainty recorded 7 years earlier prior to the unearthing of the Ecce Homo) which was interpreted as a heavenly sign of the early missionaries to stay in the Philippines. The popularity of the Santo Niño devotion overshadowed the Ecce Homo icon’s status.

In 1965, the San Agustin Museum in Intramuros displayed the sculpted Ecce Homo as one of the priceless exhibition pieces to commemorate the Fourth Centennial of the Christianization of the Philippines. Years passed, transitions occurred, and the icon remained in Manila somehow relatively forgotten or perhaps, active efforts to return it to the Basilica were overtaken by the unfolding of events. In recent memory, during an audience of the House Prior Fr. Candido P. Saladaga, OSA and the Basilica Rector Fr. Rodolfo A. Bugna, OSA with Cardinal ricardo Vidal the retrieval of the icon resurfaced. He inquired on its whereabouts expressing a long-time wish for the Ecce Homo to be brough back in Cebu being a significant artifact of its rich heritage. Almost a couple of years later, Fr. Medardo Durmiendo, OSA re-echoed a similar sentiment to request the return of the image to the Basilica. The Augustinian community of the Basilica del Santo Niño in time initiated the repossession of the precious religious object. Cordial negotiations, both on personal and institutional level, progressed steadily that concluded to a constructive agreement. Hence, the Ecce Homo came home to the Basilica del Santo Niño on a historic Saturday, on the 20th day of August 2011, finally sealing off almost five decades of prayerful longing and waiting. The arrival dates was intentionally marked as it was to concur with the icon’s discovery day exactly 439 years ago.

The official turn-over activity started at 7:00 in the morning with a Eucharistic celebration at the San Agustin Church in Manila presided by the Very Rev. Eusebio B. Berdon, OSA, the Prior Provincial of the Augustinian Province of Sto. Niño de Cebu-Philippines. The ceremonial signing of document followed toward the conclusion of the send-off Mass and after the reading of the history of the Ecce Homo discovery. At 1:30 in the afternoon the Manila delegation accompanying the image departed Ninoy Aquino International Airport (NAIA) for Cebu and arrived at Mactan-Cebu International Airport (MCIA) at around 3:00 p.m. hours prior to the slightly delayed setting foot on Cebu, abundant downpour blessed the homecoming as if the Cebu skies rejoiced in unison with awaiting crowd. The Cebu entourage received the Ecce Homo in great jubilation waving the official colors. Immediately a motorcade proceeded to the designated convergence point, the refurbished Plaza Independencia. A foot procession finally accompanied the icon to the Basilica del Santo Niño for the enthronement. To refresh the glorious day of 1572, upon arrival a re-enactment of the unearthing of the Ecce Homo was presented by the San Diego Dancers and Basilica mandated organizations. Re-reading of the historic invention of the Ecce Homo before the Mass set the tone as a fitting introduction. Rev. Fr. Jose William D. Araña, OSA, the Vicar Provincial of the Augustinian Vicariate of the Orient led the con-celebration. The grateful veneration of the relic followed the welcome liturgy.

The devotion to the Ecce Homo has started to thrive as evidenced by the expanding queue of believers, including the curious visitors, paying homage to the image of the suffering Christ. Each passing day the throng devotees are on the rise. Plans are now underway to accommodate and provide a solemn atmosphere to the faithful and a sacred space for the religious icon at the right wing of the sanctuary. Part of the long-term preparation consists of the annual commemoration of the finding as an occasion to thank the Lord for the many blessings He as generously bestowed to the people of Cebu. Rev. Fr. Arnel A. S. Dizon, OSA

Priors and Rectors of Sto. Niño Church/Basilica since 1565