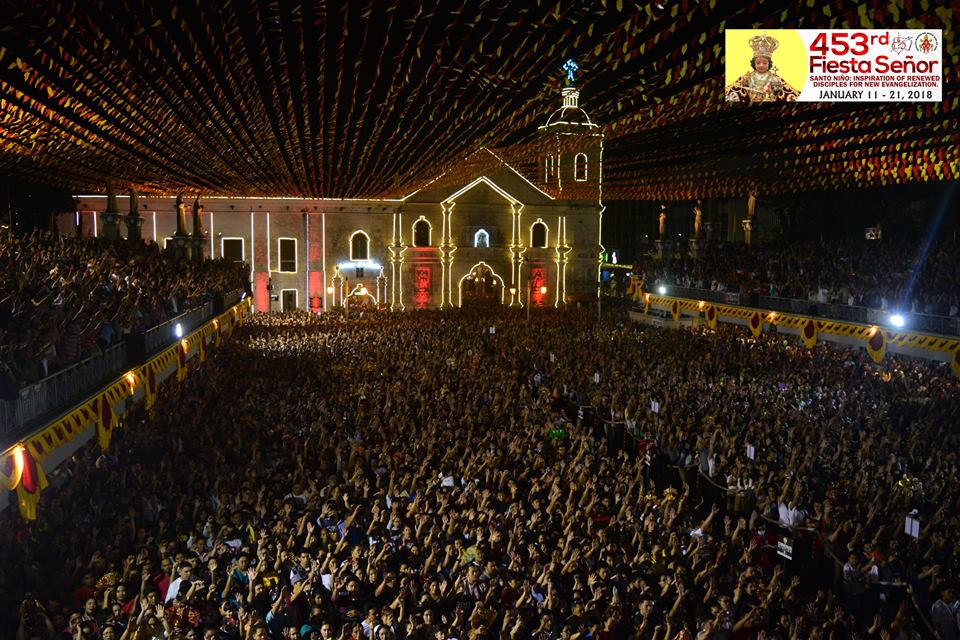 Why the Fiesta Señor is held every third Sunday of January?

At present, every third Sunday of January, the feast day of the Sto. Niño is celebrated. But this is not actually its original feast day; rather, the Feast of the Sto. Niño was originally on April 28. It coincided with the discovery of the image of the Holy Child Jesus in Cebu in 1565 by one of Miguel Lopez de Legazpi’s soldiers. The finding of the image was considered providential to the Spaniards who arrived in Cebu that a feast is deemed proper in honor of the Holy Child through the order of Legazpi. Thus, April 28 became the original feast of the Sto. Niño.

The feast honoring the Most Holy Name of Jesus was at that time an optional memorial wherein religious orders have the freedom to celebrate in various dates. Franciscans, Carmelites and Augustinians celebrate it on January 14; Dominicans on January 15; in some localities the date was on January 8. But, Pope Innocent XIII inserted into the General Calendar on December 20, 1721 that the feast be celebrated on the second Sunday after the Epiphany following the date observed by the Carthusians. Consequently, since January 19, 1721 was the 2nd Sunday after the Epiphany and at the same time falls on the third Sunday of January, it could be presumed that the basis of the feast of the Sto. Niño is this date that until present is being celebrated. Therefore, there is no fixed date on the celebration before the 1721 reform.

Meanwhile, it is also good to note that in 1641, the Prior Provincial of the Santisimo Nombre de Jesus de Filipinas ordered that the feast of the Sto. Niño be celebrated every January 14. Consequently, it coincides with the date mentioned above on the Augustinians celebrating the Most Holy Name of Jesus every January 14. January 14, 1641 falls on a Monday of that year. The Prior of the Sto. Niño church at that time was Rev. Fr. Francisco Villalon, OSA.

Upon considering this reform in the General Calendar of the Church, the feast of the Holy Child, Sto. Niño was moved also to this date during the papacy of Innocent XIII. However, other sources are considering that the feast was moved to the third Sunday to avoid conflict with the “Eastertide” or 50-day period from Easter Sunday to Pentecost Sunday.

This special feast of the Most Holy Name of Jesus is a reverence on Jesus’ name which is closely associated with the feast of the Circumcision of Jesus. According to Jewish law, on the 8th day after his birth a male child was circumcised, received his name, and became a full member of God’s covenant people.

On the contrary, according to the 1962 Roman Missal, the feast of the Most Holy Name of Jesus is kept on the first Sunday in the year; but if this Sunday falls on January 1, 6 or 7, the feast is kept on January 2.

The historical context that took place in the Church is likely the reason for the change.

Probably, the feast of the Sto. Niño in April was celebrated for 76 years since its finding in 1565 and based on the transfer of the feast every January 14 since 1641 by the Prior Provincial at that time. It was only later that having a fixed date for the Catholic Church to celebrate the feast of the Most Holy Name of Jesus is every 2nd Sunday after the Epiphany, which was introduced by Pope Innocent XIII in 1721.

Moreover, there is no exact record when did the transfer of the feast really started as to what it is at present. The liturgical change of Innocent XIII could have not been possible that the feast was immediately implemented to January but probably it was only later implemented to the Philippine Church calendar.

Lastly, at present, the finding of the image on April 28 holds importance to the history of the Church and the devotion to the Holy Child. It is for this reason that the finding is remembered every year. It is now called as the “KAPLAG” (Finding). A nine-day novena is being introduced following the novena of the January celebration. It also highlights the visit of the pilgrim image of the Sto. Niño to the Cebu Metropolitan Cathedral and the San Nicholas Church.