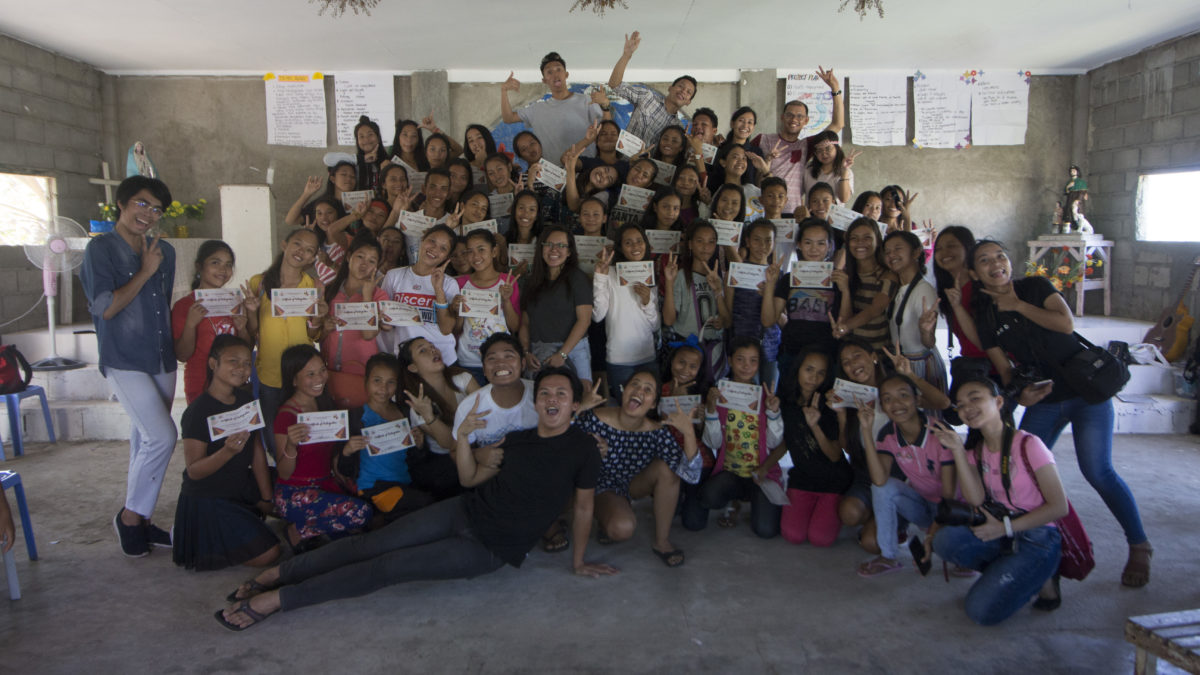 Their first meeting was in May of this year which was spearheaded by the BMSN Media Centre and the University of San Carlos volunteers. That was the starting point of creating a youth group at the barangay.

Through the youth encounter last May, the Kinatarcan youth established the Kinatarcan Youth Ministry and later this year they elected officers to lead their ministry.  From there, they became united as one family and gathered more secondary school students who are willing to be part of the organization.

Hansel V. Montolo, Coordinator of Kinatarcan Youth Ministry, shared her challenges of being a coordinator. According to Montolo, it was difficult to gather youth from Kinatarcan because some the youth lived on the different Barangays. Montolo’s dream for the Kinatarcan youth is that she wants them to show their capabilities.

(They want to show that the youth of Kinatarcan is not just hanging around and just going to school but they also have capabilities to help their community.)

She believes in the saying, “Do unto others what you would have them do unto you.”

(I accepted to be the President because of my co-youth who believe that I deserve the position. Just like Hansel, she wants to change the perception of the youth towards other people.)

The second youth encounter was participated by more than fifty (50) youth. The activity was held at Barangay Hagdan’s covered court. It started with a getting-to-know-you activity. Right after the activity was a talk by Loraine Mitzi Ambrad who shared her ideas of possible activities for the youth of Kinatarcan. She also had an activity for the youth in identifying the strengths and weaknesses as a group. During the activity, there were problems that were raised and Ambrad shared her insights on how to face such problems.

After the talk, the youth played different unity games with an idea on how to strengthen their organization.  At night, the Kinatarcan Youth Ministry and the youth volunteers ate together as a family – sharing stories about their life in the island.  After dinner, the youth volunteers slept at the humble homes of their foster families for the night.

For them, it is a privilege and exciting journey to be a part and to help establish Kinatarcan’s Youth Ministry and their community both economically and spiritually. Their second time was indeed a fruitful experience with full of learning from the people of the island which they can also apply to themselves.

“I learned that members of the youth from the City have problems not unlike those people experiences by young people in remote area.” Christele Basco, one of the volunteers of CAM, said.

It is her second time to visit in the isalnd which gave her a grounded perspective on how to better help and make activities for the young people of Kinatarcan.

On the other hand, Vojhn Ilaguisa, first timer volunteer said, “As part of the team I learned not just how they lived but I’ve learned how understanding culture is a big factor to achieve world peace; it may not be easy to obtain the peace that the world needs but in just educating each other with no arrogance and with just love and care, it is very possible that we could achieve such a goal.”