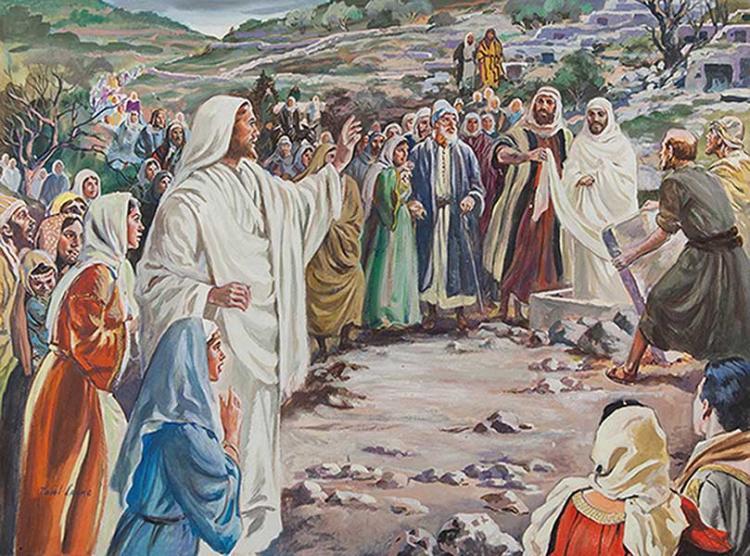 I have come to bring fire upon the earth, and how I wish it were already kindled! But I have a baptism to undergo, and what anguish I feel until it is finished!

Do you think that I have come to bring peace on earth? No, I tell you, but rather division. From now on, in one house five will be divided: three against two, and two against three. They will be divided, father against son and son against father; mother against daughter and daughter against mother; mother-in-law against her daughter-in-law, and daughter-in-law against her mother-in-law.”

Jeremiah was one of the major prophets whose experience of persecution and martyrdom teaches God’s followers that true devotion to God is not to be exercised only in good times. One’s devotion to Him is tested especially at times when a person experiences the worst in life. One can recall how this “weeping” prophet was able to transcend himself from the many persecutions he had received in preaching God’s word. He was attacked by the people because they could not accept his prophetic messages. They would not listen to him (Jer. 7:27; 17:23; 18:12; 19:15). They beat and put him in the stocks (Jer. 20:1-2). They sentenced him to death (Jer. 26:11). The king burnt his scroll (Jer. 36:23). They left him in the mud to die (Jer. 38:6) and they called him a liar (Jer. 43:2).

Jeremiah created a division in his society. In our first reading, he preached to the people that Jerusalem would be besieged by the Babylonian army. He encouraged them to surrender to the Babylonians if they would want to live. But this preaching did not go well among the city officials and with the king’s permission, he was thrown into a cistern thinking that he would die there.  But  Ebedmelech, an Ethiopian man who served in the royal palace, came to his rescue. He went out of the palace and said to the king, “My lord king, these men have acted wickedly in all they did to the prophet Jeremiah by throwing him into a cistern to die there of hunger, for there is no bread left in the city” (Jer. 38:9). Then the king commanded him to take three men with him to pull the prophet Jeremiah up from the cistern before he dies” (Jer. 38:7-10). The king’s abrogation of his decision in favor of Jeremiah through the intercession of the royal slave illustrates that God’s faithfulness outweighs all sufferings and pains. In the end, Jeremiah considers his negative experiences as tests of his fidelity to God’s calling to him to be “a prophet to the nations” (Jer. 1:5). He could have chosen to escape from suffering as a consequence of his commitment to God but it seemed impossible for him to do so for he said, “there is in my heart as it were a burning fire shut up in my bones, and I am weary with holding it in, and I cannot” (Jer. 20:9).

The “weeping” prophet experienced confusion within himself. He also caused confusion in his own society. Such was described by Jesus in our gospel today that when we come to accept and preach God, within us is a voice that whispers us to take him as our own in order to be united in him alone. When the Word of God is preached to others, it would need an uncompromising decision on our part since, as Jesus articulates, he as the Word of God has “come to bring fire on the earth” (Lk. 12:49), not peace on earth but division (v. 50), three against two and two against three, father against son and son against father, mother against daughter and daughter against mother, mother-in-law against daughter-in-law and daughter-in-law against mother-in-law” (vv. 52-53). This message confused his disciples. How could a Messiah who should change the world order in accordance with the will of God (Isa. 11:6-9) become a source of division?

Jesus would like to challenge his disciples that to choose him calls for a radical decision. It is either God or not God. This decision-making on the part of his followers will surely divide humankind. When one chooses God, then it follows that the person will leave behind anything that is not of God or the other way around. In short, for a follower, no alternative is to be presented – it is always God, no more, no less. The prophet Jeremiah serves as a model on this decision-making. He chose God despite the many challenges he encountered upon proclaiming His word.

Christians today are also exhorted with the same passion to choose no other than God himself who was made incarnate in the person of Jesus. The epistle to the Hebrews summarizes such radical decision to choose Jesus as follows: “let us run with perseverance the race marked out for us, fixing our eyes on Jesus, the pioneer and perfecter of faith. For the joy set before him he endured the cross, scorning its shame, and sat down at the right hand of the throne of God. Consider him who endured such opposition from sinners, so that you will not grow weary and lose heart” (Heb. 12:1-3). /Vulnerasti, 2022