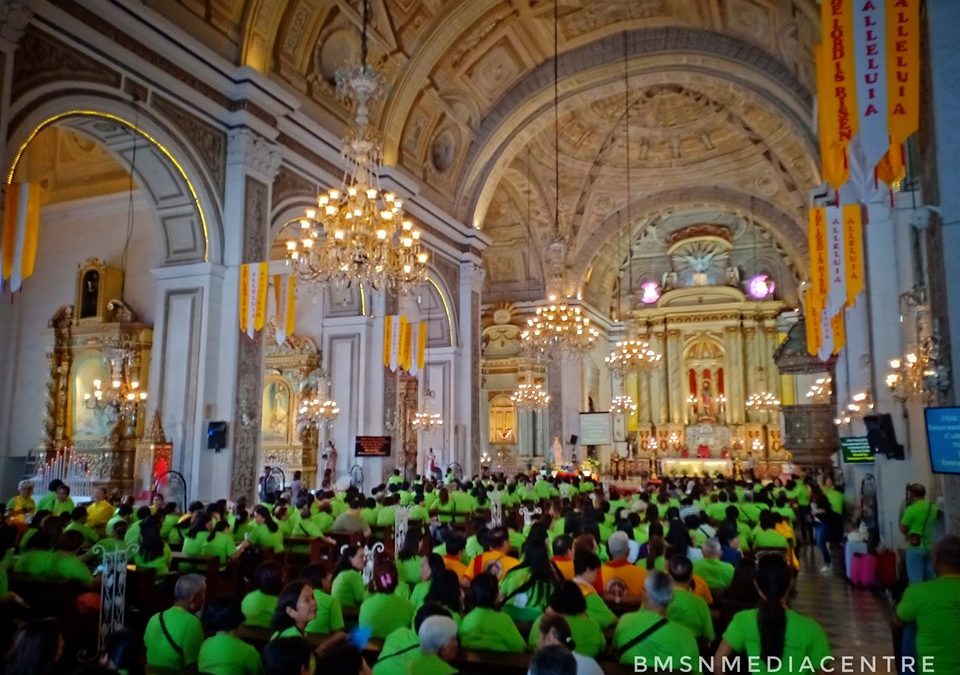 A total of 637 delegates from all over the country and abroad joined the 35th National and at the same time the 2nd International Convention of the Cofradia del Sto. Nino de Cebu from May 3 to 5, 2019. The convention took place in Manila at the Manila Grand Opera Hotel, which is hosted by the Cofradia chapter of the San Agustin Church, Intramuros.

The cofradia del Sto. Nino de Cebu is the oldest lay group in the country established in 1565 after the finding of the image of Sto. Nino in Cebu.

The annual convention is held aiming to gather the different chapters of the Cofradia del Sto. Nino de Cebu to nurture and strengthen their devotion to the Holy Child Jesus through talks, faith experience sharing, reporting of activities and socio-cultural presentations.

Fr. Pacifico Nohara, OSA, National Spiritual Director, expressed his joy that this gathering united all of the delegates because of the devotion to Sto. Nino. Fr. Nohara attributes the convention to Sto. Nino as he said, “This is the fruit of His love to us.”

Spirituality of the Little Way

On the first day of the convention, 47 chapters were present particularly 12 from Luzon, 24 from Visayas, 9 from Mindanao and 2 from abroad namely Singapore and Nebraska, USA. They were all introduced in the parade of banners.

Then, the largest number of delegates and oldest delegate were acknowledged. Bacolod chapter was recognized for having 38 participants. This chapter was only established in 2018.

Sto. Niño in the life of the Parish

On the second day of the convention, it was enriched with inputs from the invited speaker and sharer. Fr. Estacio, parish priest of Sto. Nino de Taguig gave focus on the parish he administered and how the devotion to the Sto. Nino brought life-changing stories to the parishioners. In one of his programs, he put up kiosks with the images of Sto. Nino around the streets of the parish. He testified that after putting those images the community becomes more peaceful. People passing by would make the sign of the cross to honor the Child Jesus.

Meanwhile, Fray Alvin from the Vicariate of the Orient touched the participants

8 new chapters were created since last year’s convention as the Cofradia is continuously growing in number in the past three years.

The convention is also graced by 4 delegates from the Greater Omaha, Nebraska, United States of America. According to Ben Gonzales, there are quite a number of devotees of Sto. Nino in their place but never knew that there is a convention like this. They have established cofradia but has not been affiliated to the Basilica and joining the convention is one way of them to connect to the home of the devotion.

The largest number of delegates are from Bacolod City, which has 38 members, who flew to Manila with the exemption of the host chapter of San Agustin Intramuros with 65 participants

In the afternoon of the second day, the the 47 chapters reported their different activities through a video presentation.

The delegates spent the third day with tour around Manila and the Museum of San Agustin. This is for the delegates to look back at the past how the Augustinians, the caretakers of the Sto. Nino, do their mission in the country for the last 454 years since their arrival in 1565.

A holy mass at 10:00 am was celebrated at San Agustin Church for the closing ceremony of the 3-day convention. Rev. Fr. Peter Casiño, OSA, Vicar Superior of the Vicariate of the Orient of the Province of the Most Holy Name of Jesus.

In his homily, he challenged the cofradia members to become a witness of Jesus Christ to the world especially in world filled with moral issues and problems. He hoped the devotion to Sto. Nino be an inspiration in their lives as Christians.