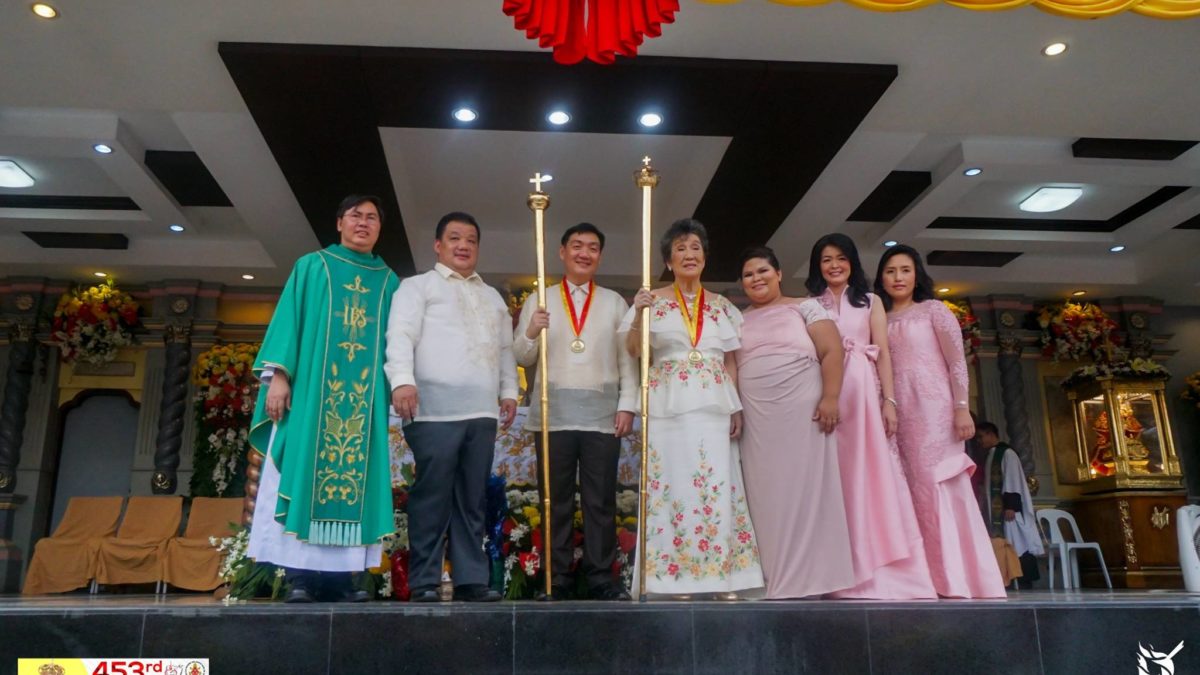 Much of the religious aspect in our Filipino culture is a result of over three hundred years under the influence of our Spanish colonizers. A catholic-dominated country, the Philippines continues to enrich many traditions from the faith we once borrowed and we’ve now come to call as our own.

One of these traditions is the selection of Hermano and Hermana Mayores in a religious festival.  For the 453rd Feast of Sto. Niño, this honor falls to Mark Joel Go, and his mother Rosalina.

A Hermano or Hermana Mayor, Spanish terms for older brother and sister, is a position of great significance in every celebration. As hosts of the event, they are not only tasked with making sure all aspects of the festival are successful, they also represent the rest of the participants with whom they share the same devotion and reverence.

“At first we were shocked,” Mark Go said, when asked about their reaction to the initial nomination. He said that even then, they tried to decline. But when news of the confirmation came and indeed, he and his mother will be this year’s Hermano and Hermana Mayores, they chalked it up to God’s will and accepted the offer.

“Pagbuot na tingali sa Ginoo,” he added. “It’s a great honor not just for mom and me, but to the whole family as well.”

(It must be God’s will. It’s a great honor not just for mom and me, but to the whole family as well.)
Fr. Pacifico Nohara, OSA the Basilica del Sto. Niño rector, shared that choosing the Gos as the first mother and son Hermana-Hermano was as much an acknowledgement of their contribution to the community, as it was an answered prayer.

“Daghan na sila og natabang diri [sa Basilica],” Fr. Nohara said, attesting that from the museum staff to the security personnel, people around the church have witnessed the charity of the family.

(They have contributed a great deal here in Basilica.)

However, one particular moment that stands out in Fr. Nohara’s memory is on that fateful day months ago when, on his way to the image of Sto. Niño to offer his own prayers, he saw Mark and mother Rosalina in the basilica and was struck with what he can only call a sign from the Child Jesus Himself.

(Our spiritual founder is St. Augustine, and his mother is St. Monica. Mrs. Go raised all her children to go to church and pray. That is also the life of St. Monica, who really guided her son, St. Augustine.)
But unlike St. Augustine, who was often called a ‘wandering child’, Mark, third of four children, stated that his mother and late father really instilled the importance of practicing their faith from the very beginning of their childhood.

“Since early 2000, mom and my late father have been supporting contigents,” Go recounted. He also shared that they used to have a street décor in a center island near Fuente Osmeña, and even though that spot is no longer there, their annual tradition with the Sto. Niño continues.

Now the owner of St. Cecilia’s College in Minglanilla, Go remains steadfast in his advocacy on religion, even when in it comes to education.

“Number one [objective] is the propagation of faith, since [the school] is under the supervision of a religious order,” he added.

But just like many devotees, there are times when our faith will be challenged and we are put through trials which will test how great our devotion really is. For Mark and his family, that trial happened in 2005.
“My mother got sick, and an open biopsy was needed,” he shared. “The once-a-year relation became a very frequent affair.”

Mark said that for many life-and-death situations, one can only seek God, and if you’re a Cebuano, you turn to Sto. Niño.

“We prayed that it would be benign,” he said. “Not only was it benign, but the scheduled operation was called off.”
A year after that, when his mother’s vision started to fail to the point where she was already technically blind, they turned to Sto. Niño once more.

(We asked that she’d be able to see. Even if she can longer read, we prayed that at least she can just see. He gave back not only her vision, but she was able to read again.)

Mark and his family continue to express their gratitude to the Child Jesus for the blessings they receive.
“It’s a daily occurrence, the blessings big and small,” he added.

Now that he and his mother are given the opportunity to share their devotion as Hermano and Hermana Mayores of the Fiesta Señor celebration, they urge the people to remember the spiritual essence of the festival.

“We should not only keep the faith and the devotion, but we should spread it.”