The Heartwarming Story Behind the Sto. Niño Flowers

The Heartwarming Story Behind the Sto. Niño Flowers 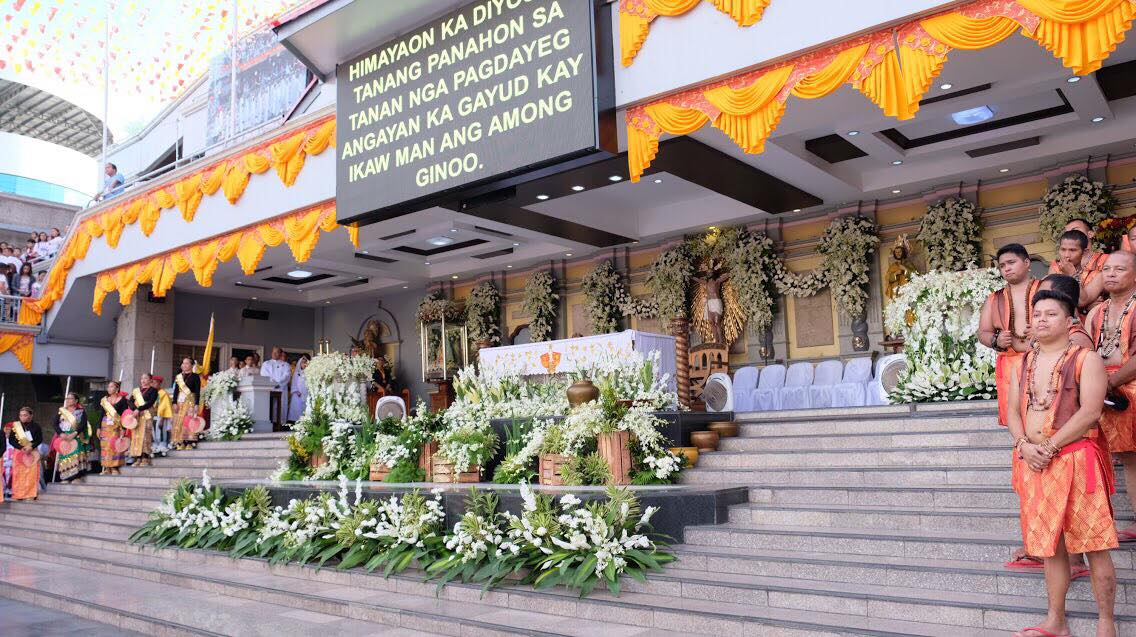 Upon setting foot on the sacred grounds of the Basilica Minore del Santo Nino de Cebu, have you ever wondered who the figures behind the flowers are?

Every Fiesta Señor, the church overflows with the fragrance of a thousand flowers—all thanks to a number of florists and their benefactors. One of them is Mrs. Jessica Discaya, a florist and benefactor of over three decades.

Dancing has always been the way of worship for festival goers and Sto. Niño devotees but she is clumsy in the art, Mrs. Discaya explained. It is for this reason that the former Hermana vested in January 2011 became enamored with floral arrangement.

“I can’t dance, so I do it with flowers,” and on she went and danced in the form of lilies and chrysanthemums residing in the nestles of the chapel, tabernacle, and altar. Lo and behold she became a mainstay in providing the most notable pieces of the annual Fiesta Señor celebration.

Because of local origin, her beloved flowers are fairly easy to set up. Preparations take place in a matter of weeks, if not days. For this year’s fiesta, in fact, she contacted suppliers just as the Walk with Jesus occurred last January 10.

However, our florist also goes through rough patches. A typhoon struck the city once and her chosen flowers went out-of-stock. It is through unexpected mishaps like this that she is compelled to find alternative solutions – contacting suppliers outside of Cebu, for one.

Mrs. Discaya is able to perform her swift and graceful services due in part to her trusted partners, suppliers, and her decorator Socorro “Coring” whom she has worked with for as long as she could recall. What is admirable is that these people have little to no conflict. The secret behind this, she says, is they all share one purpose and that is to honor the child Jesus.

After the Visperas which is Mrs. Discaya’s assigned day as florist, the flowers are donated to the Carmelite Monastery in Mabolo, Cebu City.

Growing up with devout parents and grandparents, Mrs. Discaya immediately recognized the essence of religion and faith, a value she continues to instill in her own family to this day.

In 1993, she recalled how the family’s export business was at its peak and how this might have caused things to go over her head, causing her own mother to remark on the fact that she had stopped going to Church regularly. Almost instantly, the family business came crashing down.

Instead of doubting her faith in trying times, Mrs. Discaya narrated how the incident that made her lose everything humbled her and brought her closer to God, instead.

She, along with her husband and children, dedicatedly serve the Church together. Even one of her sons is part of the food committee serving during the entire fiesta celebration.

Another trial she encountered not long ago involved her husband overcoming a heart attack that caused him to flat line 6 times. Miraculously, Mr. Discaya made a full recovery just a year later and is currently doing well, hence why Mrs. Discaya was inspired to arrange pink flowers for last year’s celebration in honor of her husband’s health.

If anything, these experiences only served to strengthen the family’s faith in the Holy Child. Mrs. Discaya hopes that her children carry on the family’s devotion and service to the Sto. Niño the way she had for the past 30 years, perhaps not only in the form of flowers but in whichever way their hearts desire.

A person’s life is full of unexpected circumstances and mishaps. Some people may look at these from a negative perspective; but for some reason, these challenges only affirmed Mrs. Discaya’s faith in the Holy Child.

Another challenge she surpassed was from way back in 2011 when she had a stroke and consequently, half of her body became paralyzed. She was admitted to the hospital on the 3rd of December but prior to that, she made a commitment to be in the Remedios Parish of Labangon on the 8th of December.

Having served in the food committee in the past and being hailed the Hermana last 2011, she now serves the Church whichever way she can as a sign of thanksgiving for all the blessings she received throughout the years. According to her, everything she does for the Church is in thanksgiving.

Bearing the fact that Mrs. Discaya does this as a way of showing her service to the Child Jesus, she is meticulous when it comes to her flower arrangements. She always makes sure that the flowers, which are exclusively for Sto. Niño, are nothing less than the best.

Upon being asked which year she would consider her best work, the devout florist simply replied, “Every year is my best work because I do it for Sñr. Sto. Niño.” | Maria Consuelo Pacilan, Kate Visorro, and Lara Eviota, USC Student Volunteers