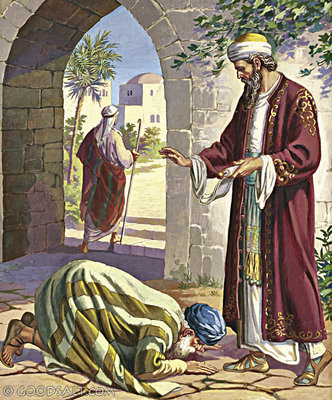 Then Peter asked him, “Lord, how many times must I forgive the offenses of my brother or sister? Seven times?” Jesus answered, “No, not seven times, but seventy-seven times. This story throws light on the kingdom of Heaven: A king decided to settle accounts with his servants. Among the first of them was one who owed him ten thousand pieces of gold. As the man could not repay the debt, the king commanded that he be sold as a slave with his wife, his children and all his goods, as repayment. The servant threw himself at the feet of the king and said, ‘Give me time, and I will pay you back everything.’ The king took pity on him, and not only set him free, but even canceled his debt. When this servant left the king’s presence, he met one of his fellow servants, who owed him a hundred pieces of silver. He grabbed him by the throat and almost choked him, shouting, ‘Pay me what you owe!’ His fellow servant threw himself at his feet and begged him, ‘Give me time, and I will pay everything.’ But the other did not agree, and sent him to prison until he had paid all his debt. Now the servants of the king saw what had happened. They were extremely upset, and so they went and reported everything to their lord. Then the lord summoned his servant and said, ‘Wicked servant, I forgave you all that you owed me when you begged me to do so. Weren’t you bound to have pity on your fellow servant, as I had pity on you?’ The lord was now angry. He handed the wicked servant over to be punished, until he had paid the whole debt.” Jesus added, “So will my heavenly Father do with you, unless you sincerely forgive your brothers and sisters.” When Jesus had finished these sayings, he left Galilee and arrived at the border of Judea, on the other side of the Jordan River.